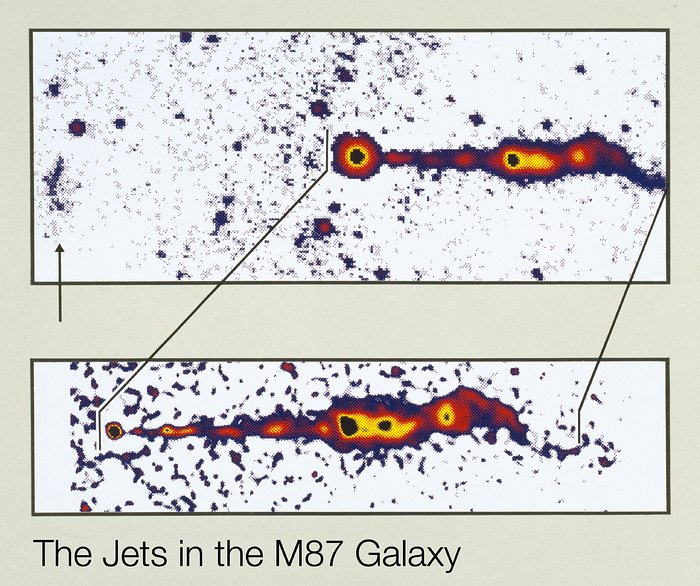 These are the first images of both of the jets in the giant galaxy Messier 87. They were obtained with the 2.5 metre Nordic Optical Telescope at La Palma, Canarian Islands, Spain under near-perfect conditions. They are shown in "false-colours'' to enhance the visibility of the delicate structures with different brightness.

The upper photo is a combined image, produced by the superposition of three CCD exposures obtained in yellow, red and near-infrared (V, R and I) spectral bands, respectively, and from which the background light from the M87 galaxy has been subtracted. The main jet which has been known since long is seen on the right-hand side, while the newly discovered arc-like structure which represents the end of the counter-jet is visible at the extreme left (indicated by a vertical arrow). The resolution of this image is ~ 0.6 arcsecond and the total integration time was 20 min.

In the lower frame, the above image of the main jet has been computer sharpened, so that the resolution is now about 0.25 arcseconds. The individual knots are well visible and represent the path of the energetic particles which are emitted by the centre of M87, here seen as a point-like object to the left. This  represents the highest resolution image of the M87 jet ever achieved and published by  means of optical ground-based observations.