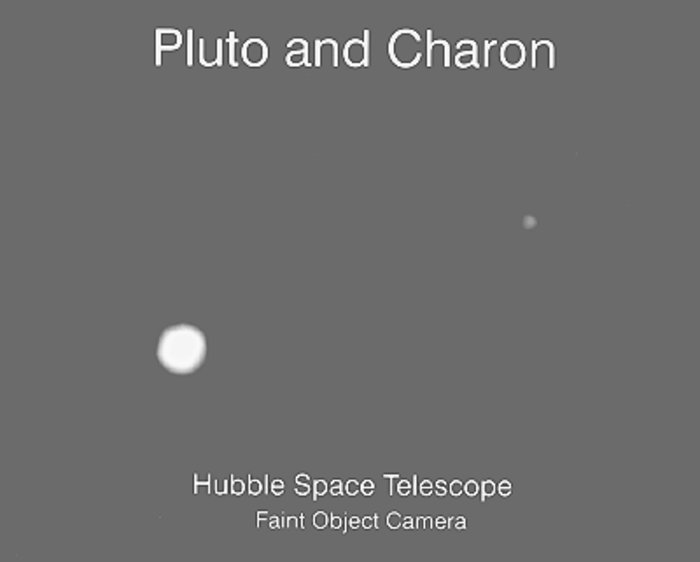 This is the clearest view yet of the distant planet Pluto and its moon, Charon, as revealed by the Hubble Space Telescope (HST). The image was taken by the European Space Agency's Faint Object Camera on February 21, 1994, when the planet was 4,400 million kilometres from the Earth; or nearly 30 times the separation between the Earth and the Sun.

The HST corrected optics show the two objects as clearly separate and sharp disks. This now allows astronomers to measure directly (to within about 1 percent) Pluto's diameter of 2320 kilometres and Charon's diameter of 1270 kilometres.

The HST observations show that Charon is bluer than Pluto. This means that the worlds have different surface composition and structure. A bright highlight on Pluto indicates that it may have a smoothly reflecting surface layer.

A detailed analysis of the HST image also suggests that there is a bright area parallel to the equator of Pluto. However, subsequent observations are needed to confirm is this feature is real.

Though Pluto was discovered in 1930, Charon was not detected until 1978. This is because this moon is so close to Pluto that the two world's are typically blurred together when viewed through ground-based telescopes. The new HST image was taken when Charon was near its maximum elongation from Pluto (0.9 arcseconds). The two worlds are 19,640 kilometres apart.

This photo accompanies ESO Press Release eso9409. It is available from ESO as ESO Press Photo eso9409-1 and from the Space Telescope Science Institute (Baltimore, USA) as STSci-PR94-17. Reproductions should be credited to NASA, ESA and ESO.