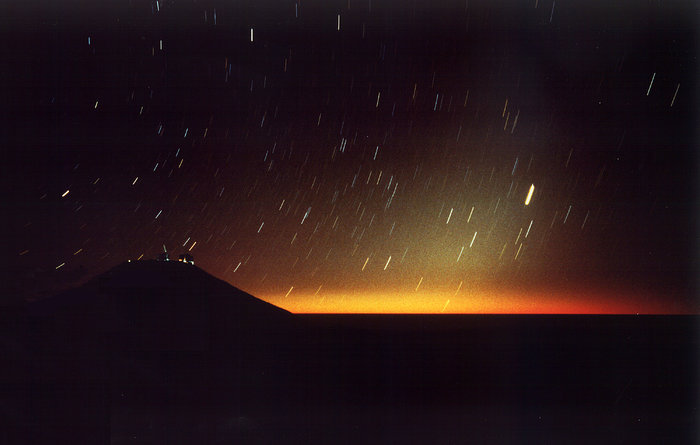 This photo was made about 90 minutes after sunset on December 7, 1996, from the `NTT Peak', a mountain top at some distance inland from Paranal, and looking in the South-West direction. It is a fixed 6-minute exposure - for this reason, the stars are seen as small trails. At the time of the exposure, the Sun was more than 20° under the western horizon, but some scattered light in the Earth's atmosphere is still seen along the horizon.The field of the photo spans nearly 90°. The south celestial pole is located to the upper left and the celestial equator is just outside the right border. The zodiacal light which is caused by the reflection of sunlight in small dust particles in the main plane of the Solar System is well visible as a cone of light, rising from the horizon along the Ecliptic, to the right in the photo.The brightest object to the right is the trail of the planet Jupiter (magnitude -1.4); the stars below it are all located in the southern constellation of Sagittarius. The trail of medium brightness at the very horizon (just right of the centre) is that of the planet Mercury (magnitude +0.2). The two, relatively bright stars, just above the illuminated Paranal observatory, are Beta and Gamma of the constellation Ara (The Altar). The Milky Way band stretches along the horizon, but is barely visible on this photo.