The spectrum of the brown dwarf KELU-1 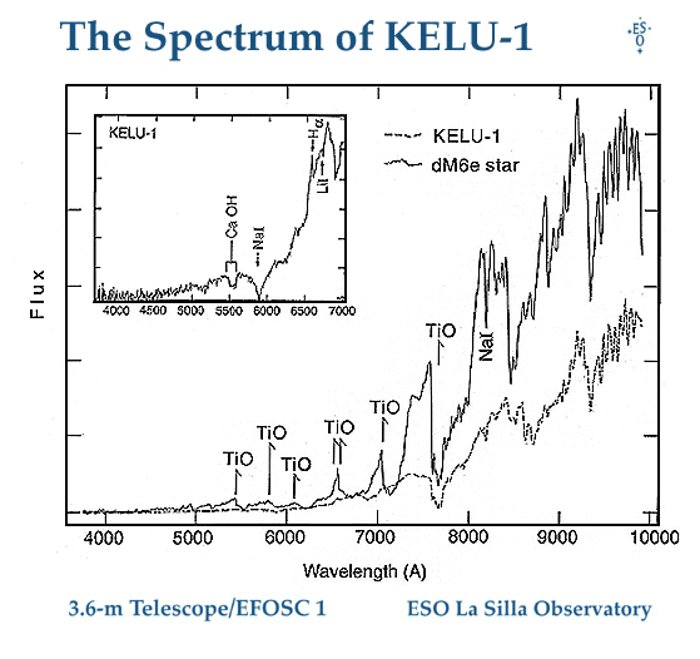 This photo shows the spectrum of the newly found Brown Dwarf object, KELU-1, obtained with the EFOSC1 multimode instrument at the ESO 3.6-m telescope.

A comparison with the spectrum in the visual to near-infrared region (4000 - 10000 A, i.e. 400 - 1000 nm) with that of a normal, cool dwarf star of spectral type dM6e shows significant differences. In particular, it does not display the bands of titanium oxide which are seen in the dwarf star.

The insert shows the visual part of the spectrum (4000 - 7000 A) enlarged. The bands of CaOH and neutral sodium (Na) are seen, and also an absorption line of neutral lithium. There is a weak H-alpha emission line from neutral hydrogen. This is the first blue spectrum ever obtained of a Brown Dwarf object.

This tracing is based on two 30-min spectral exposures in the visual region and two 20-min exposures in the near-infrared region. The other spectrum is of another high-proper-motion object identified during the Calan-ESO proper-motion survey carried out with the ESO 1-m Schmidt telescope and herewith classified as of the dwarf M-type.