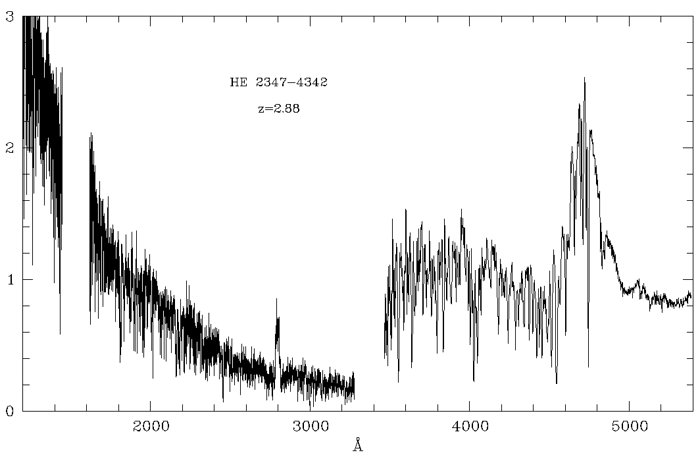 This diagram shows the spectrum of the newly discovered, unusually bright quasar HE 2347-4342 . It is a composite of data obtained with the FOS instrument at the Hubble Space Telescope (ultraviolet part - to the left) and the EFOSC instrument at the ESO/MPI 2.2 m telescope at La Silla (visual part - to the right). The abscissa unit is Angstrom (1 A = 10 -10 m); the ordinate is relative intensity (brightness).

The strong Lyman-alpha hydrogen line in this remote object (redshift z = 2.885) is seen at 4700 A. Note also the intensity increase towards the ultraviolet part at the left in the diagram which is due to the unusually `clear view' in this direction. The He + area near 1180 A is just outside the left border. The feature near 2800 A is an artifact. The two `holes' correspond to spectral regions in which the data are too noisy (left) or missing (centre).

Observations described in ESO Press Release eso9720 (1 August 1997) have shown that there are large regions of still not fully ionized helium near this object. This is the first time that is has been possible to look back to the re-ionization epoch in the early Universe, a few billion years after the Big Bang .