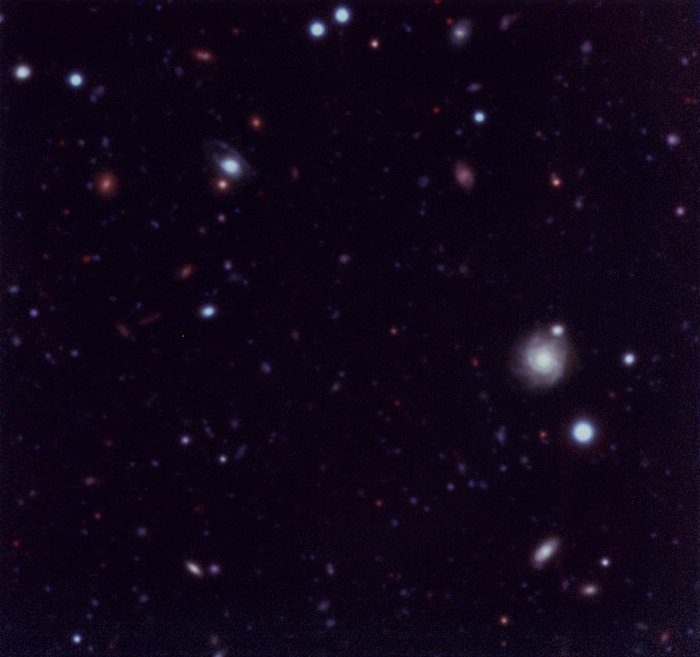 This colour image shows objects as faint as 26th magnitude and it illustrates well the performance in deep imaging at good angular resolution with a relatively modest investment in exposure time at a 4m-class ground-based telescope. Of the approximately 500 galaxies detected in this field, the largest fraction are expected to be at redshifts smaller than z = 1 and about 20 percent to have higher redshifts, up to z = 4 and possibly beyond. During this project, a total of 122 CCD frames were obtained in four colours [blue (B), green-yellow (V), red (r) and near-infrared (i-band)] with a total exposure time of no less than 31.5 hours. Total exposure times of 50400, 23400, 23400, 16200 seconds were obtained in the four bands, respectively. The frames cover a 2.3 x 2.3 arcmin 'empty sky' field centered south of the high-redshift quasar QSO BR 1202-0725 (z = 4.7), located just south of the celestial equator. These frames have been combined to produce a 'true' colour image in the sense that 'blue', 'green' and 'red' represent the B-, V- and (r+i)-frames, respectively. This version of the combined image has a lower contrast and brings forward structural details in the brighter objects in the field.