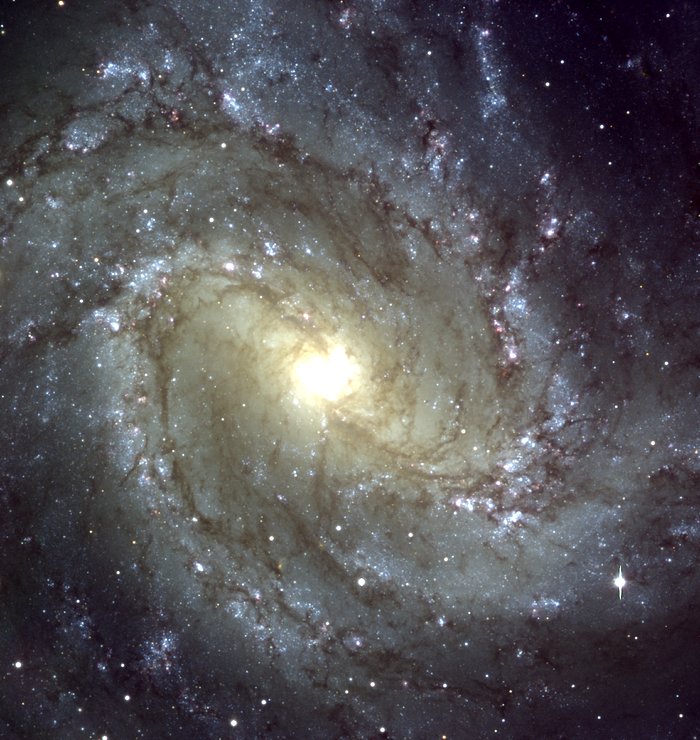 This image of a well-known spiral galaxy, Messier 83, was prepared by superposing three CCD frames from this data release that are now available in the archive. This galaxy is located in the southern constellation Hydra (The Water-Snake) and is also known as NGC 5236; the distance is about 15 million light-years. The spiral structure resembles that of the Milky Way Galaxy in which we live, but Messier 83 also possesses a bar-like structure at the centre.

This photo shows the central region of a beautiful spiral galaxy, Messier 83, as observed with the FORS1 instrument at VLT ANTU . It is based on a composite of three images, all of which are now available from the ESO Science Data Archive, as described in this Press Release. The three frames were taken in March 1999 through three different filters: B (wavelength 429 nm; Full-Width-Half-Maximum (FWHM) 88 nm; exposure time 10 min; here rendered as blue), R (657 nm; 150 nm; 3 min; green) and I (768 nm; 138 nm; 3 min; red) during a period of 0.8 arcsec average seeing. The field shown measures about 6.8 x 6.8 arcmin and the images were recorded in frames of 2048 x 2048 pixels, each measuring 0.2 arcsec. North is up; East is left.

Compare also with ESO Press Photo eso9826 (in B/W) of a small area in this galaxy that was obtained with the VLT Test Camera in June 1998.