The Galactic Centre above the ESO 3.6-metre telescope 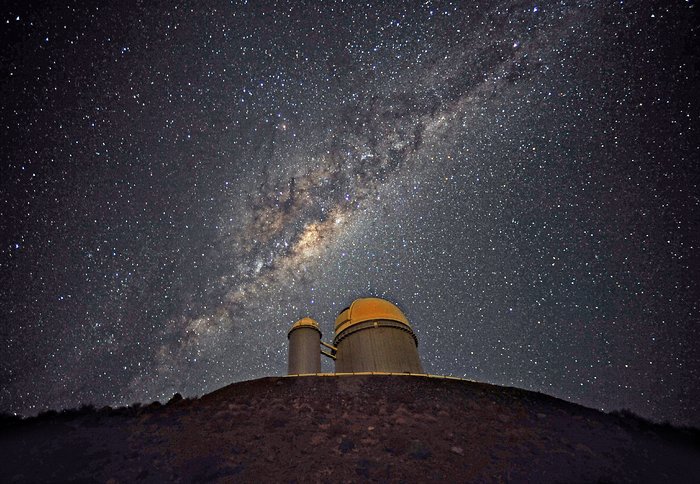 The ESO 3.6-metre telescope at La Silla, during observations. Across the plan of the picture, is the Milky Way, our own galaxy, a disc-shaped structure seen perfectly edge-on. Above the telescope´s dome, here lighted by the Moon, and partially hidden behind dark dust clouds, is the yellowish and prominent central bulge of the Milky Way. The whole plan of the galaxy is populated by hundred thousand million of stars, as well as a conspicuous amount of interstellar gas and dusts. The dust absorbs the visible light and reemits it at longer wavelength, appearing totally opaque at our eyes. The ancient Andean civilizations saw in these dark lanes their animal-shaped constellations. By following the dark lane which seems to grow from the centre of the Galaxy toward the top, we find the reddish nebula around Antares (Alpha Scorpii). The Galactic Centre itself lies in the constellation of Sagittarius and reaches its maximum visibility during the austral winter season. The ESO 3.6-metre telescope, inaugurated in 1976, currently operates with the HARPS spectrograph, the most precise exoplanet “hunter” in the world. Located 600 km north of Santiago, at 2400 m altitude in the outskirts of the Chilean Atacama Desert, La Silla was first ESO site in Chile and the largest observatory of its time.

This photograph was taken by ESO Photo Ambassador Serge Brunier.