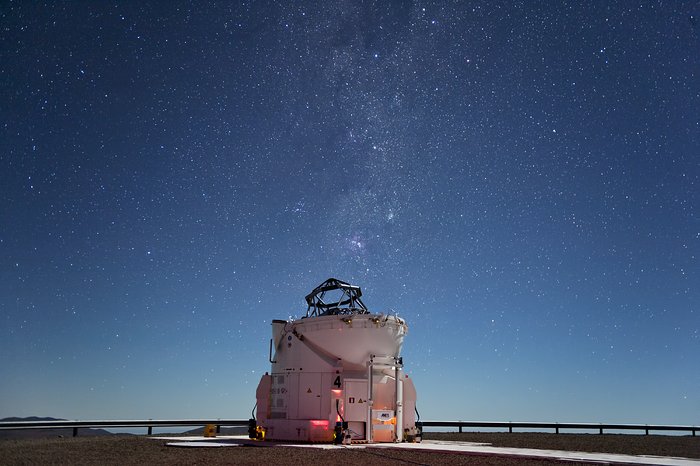 After the Sun sets at ESO’s Paranal Observatory darkness descends, but the black sky is speckled with a glorious myriad of sparkling stars. This 15-second exposure demonstrates just how dazzling the skies above Paranal are. Located high in the Atacama Desert in Chile far from any sources of light pollution, on a clear moonless night it is possible to see your shadow cast by the light of the Milky Way alone.

Says visual artist and ESO Photo Ambassador José Francisco Salgado, “The skies at Paranal are among the darkest and steadiest I have photographed. I love photographing observatories and at Paranal it's incredible how you can still see just with starlight and zodiacal light!”

In the image the stars of the Milky Way seem to be pouring forth from the open dome of the telescope. The brightest patch close to the telescope is the Carina Nebula (NGC 3372), which contains some of the most massive stars in our galaxy (see for example eso0905 and eso1031). Near the top of the image are the stars of Crux, the Southern Cross. This constellation, and that of Carina, are in the southern sky and are therefore not visible from most northern latitudes.

The telescope in the image is the fourth 1.8-metre Auxiliary Telescope, part of the Very Large Telescope Interferometer (VLTI). The VLTI consists of four 8.2-metre telescopes, and the four smaller Auxiliary Telescopes, which have mirrors 1.8 metres across. Thanks to the size of the telescopes, their cutting-edge technology, and the excellent conditions at the site, it is no wonder that Paranal is considered the most advanced visible-light observatory in the world.