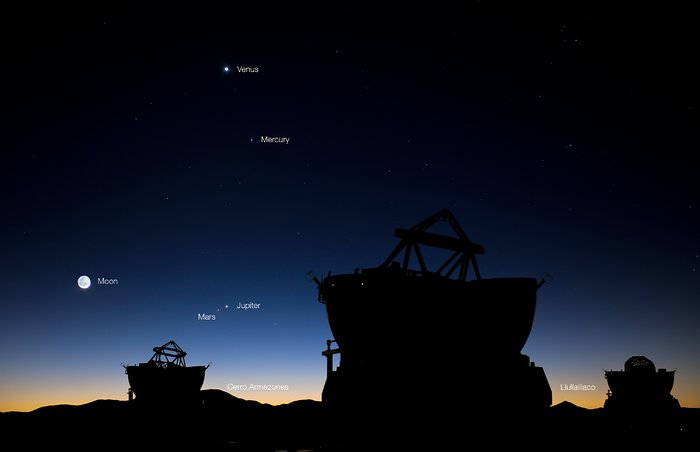 Yesterday, in the morning of 1 May 2011, about an hour before sunrise, five of our Solar System’s eight planets and the Moon could be seen from Paranal. The four planets in the sky were Mercury, Venus, Mars and Jupiter, and they were joined by the crescent Moon to create this wonderful photo opportunity of a planetary conjunction — two or more celestial bodies seen near each other in the sky, usually from the Earth.

In this photo, the bright crescent of the Moon is illuminated by the Sun (which is just below the horizon), while the darker part receives only light reflected from the surface of the Earth. Venus is the highest and brightest planet, with Mercury below and to the right. Jupiter is directly below Venus, but much closer to the horizon. Mars can be seen just below and to the left of Jupiter; the separation in the sky was less than half a degree. The fifth planet in the photograph is of course the Earth, providing our vantage point for this spectacular conjunction.

This view from Cerro Paranal shows some nearby, and more distant, mountain peaks in the Atacama Desert, one of the driest places on this planet. Three of the ESO Very Large Telescope’s 1.8-metre Auxiliary Telescopes (ATs) are silhouetted in the foreground. Just to the right of the leftmost AT is Cerro Armazones, site of the future European Extremely Large Telescope (E-ELT). Armazones is about 20km from Paranal. Between the ATs on the right is the distant volcano Llullaillaco, on the border of Chile and Argentina. It is much further away than Armazones, at a distance of 190km, but the exceptionally clear atmospheric conditions in the Atacama Desert provide a razor-sharp view, despite the distance. These conditions also help to make the region one of the best in the world for astronomical observations.

The image without annotations can be downloaded from: http://www.eso.org/public/images/potw1118a_clean/