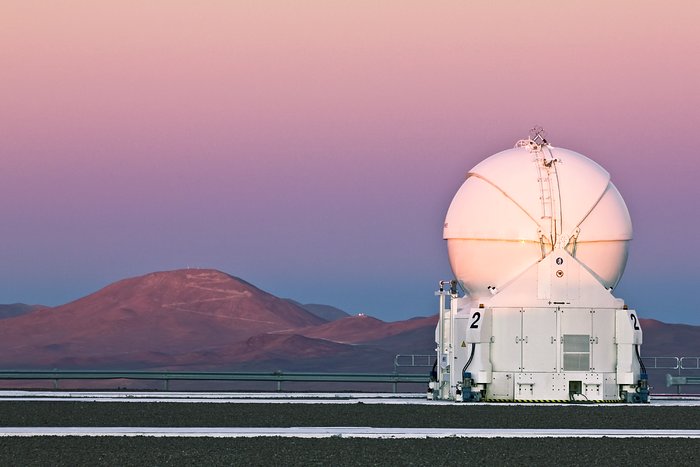 ESO Photo Ambassador Gianluca Lombardi was in the perfect position to capture a crisp dusk view of Auxiliary Telescope (AT) 2, on Cerro Paranal. Once the Sun sets, the cloudless skies above the Chilean desert will be filled with stars, and AT2 will begin its work. In the background on the left is Cerro Armazones, with a road zigzagging to its peak, home of the future European Extremely Large Telescope. Site-testing equipment can be seen on the peak. The lower peak to the right of Cerro Armazones is the site of smaller telescopes operated by the Instituto de Astronomía of the Universidad Católica del Norte.

There are four ATs on Cerro Paranal, which form part of the Very Large Telescope (VLT). They are used for a special technique called interferometry, which allows multiple ATs, or the even larger Unit Telescopes, to combine their power and see details up to 25 times finer possible than with the individual telescopes.

The round AT enclosure shown in the photo is made from two sets of three segments, which were closed at the time the picture was taken. Its job is to protect the delicate 1.8-metre telescope from the desert conditions. The enclosure is supported by the boxy transporter section, which also contains electronics cabinets, liquid cooling systems, air-conditioning units, power supplies, and more. During astronomical observations the enclosure and transporter are mechanically isolated from the telescope, to ensure that no vibrations compromise the data collected.

The transporter section runs on tracks, so the ATs can be moved to 30 different observing locations. As the VLT Interferometer (VLTI) acts rather like a single telescope as large as the group of telescopes combined, changing the positions of the ATs means that the VLTI can be adjusted according to the needs of the observing project.