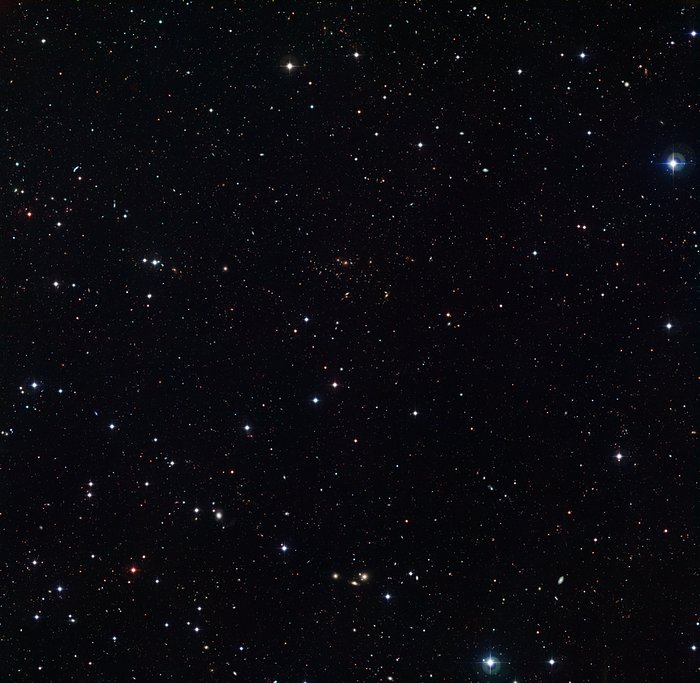 This frame, scattered with distant stars and galaxies, is a deep-field image taken using the Wide Field Imager (WFI), a camera mounted on the MPG/ESO 2.2-metre telescope located at the La Silla Observatory, Chile.

It was snapped as part of the COMBO-17 survey (Classifying Objects by Medium-Band Observations in 17 filters), a project that imaged five small patches of sky in 17 different coloured optical filters. The total area of sky explored in each of the COMBO-17 fields equates to approximately the same size as the full Moon, and has revealed huge numbers of distant objects — demonstrating just how much is still waiting to be discovered in our skies.

The image shows a region that was also investigated as part of the FORS Deep Field (FDF), a project that examined various areas of sky in great detail and depth using the FORS2 spectrograph instrument currently installed on ESO’s Very Large Telescope at the Paranal Observatory, Chile. However, these WFI images used many more filters than previous FDF observations, and looked at bigger patches of sky, resulting in images like the one above.

These small glimpses into the Universe have unveiled tens of thousands of distant stars, galaxies, and quasars previously hidden from our view, and have been used to investigate gravitational lensing and the distribution of dark matter in galaxies and clusters.