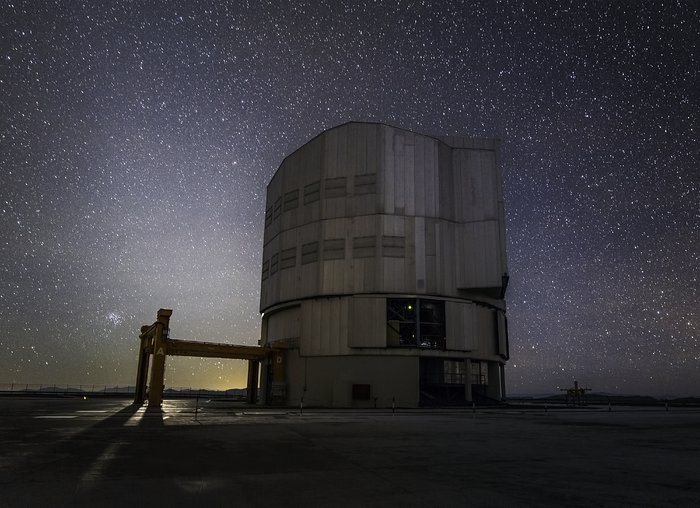 Framed by the glow of the Moon setting, the fourth Unit Telescope (UT4) of ESO's Very Large Telescope (VLT) at Paranal Observatory is enveloped by the sky it studies night after night.

Located high on Cerro Paranal, the majestic machine sits gracefully at an altitude of 2635 metres above sea level. Paranal is the world's most advanced visible-light astronomical observatory and ESO’s flagship facility, containing a suite of telescopes.

UT4, otherwise known as Yepun (Venus), is one of the four Unit Telescopes that comprise the VLT, also working with their four Auxiliary Telescope companions to form the super-sensitive Very Large Telescope Interferometer (VLTI). Housed within a thermally controlled building, UT4 uses its incredibly precise 8.2-metre mirror to scan the stars and unravel the mysteries of the Universe.

The other three Unit Telescopes are known as Antu (Sun), Kueyen (Moon), and Melipal (Southern Cross), from the language of the Mapuche people from some 500 kilometres south of Santiago.

This image was snapped by photographer John Colosimo, and manages to capture both the beauty and complexity of the lone Unit Telescope.