A planet hunter and its neighbour 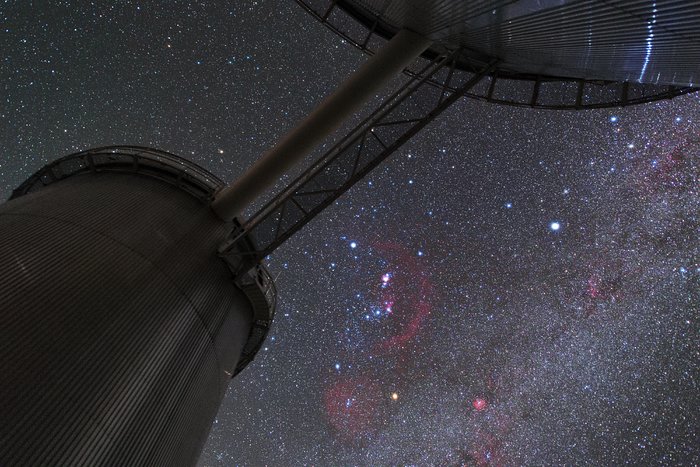 In this spectacular shot from northern Chile, the immediately recognisable and magnificent constellation of Orion (The Hunter) peers down on the small walkway connecting ESO’s 3.6-metre telescope to the now-decommissioned Coudé Auxiliary Telescope, both located at ESO’s La Silla Observatory.

A closer look at this long exposure, captured by ESO Photo Ambassador Yuri Beletsky, reveals many interesting features — including a streak of light as an artificial satellite passes behind the telescope’s dome (to the right of the frame). Barnard’s Loop, a faint emission nebula thought to be the remnant of a supernova, appears as a faint reddish arc encircling the bright Orion Nebula. Just below and parallel to the walkway, the dark dust lanes of the Milky Way can be seen rippling across the starry sky.

ESO’s 3.6-metre telescope is equipped with the High Accuracy Radial velocity Planet Searcher (HARPS) instrument, one of the most accurate and productive planet hunters in the history of astronomy.