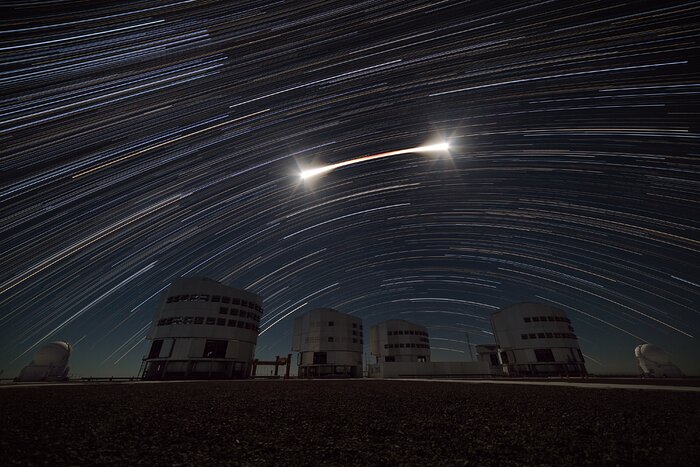 In this Picture of the Week, a three hour long photographic sequence shows the path of a lunar eclipse over ESO’s Very Large Telescope (VLT) at Paranal, Chile. This eclipse, which took place on 20-21 January 2019, was visible from the Americas. As the Moon moves into the Earth’s shadow, it becomes darker and acquires a red hue. This reddening, which is due to sunlight being scattered by Earth’s atmosphere before reaching the Moon, can be seen in the middle of the trail. This trail, and those of the stars in the background, are due to the Earth’s rotation and are a ubiquitous feature in long exposure photographs of the night sky.

The stars above ESO’s telescopes can be seen clearly because of the high altitude at the Paranal mountain and the lack of light pollution from human settlements. But the bright lunar light can still disturb astronomical observations done in visible light. Astronomers therefore must take into account the position and phase of the Moon when planning and executing observations.

Fun fact: did you know that astronomers observed this lunar eclipse with the NASA/ESA Hubble Space Telescope to better understand possible signs of life on planets around other stars? Find out more about this in our ESOblog.