The VLT in action* 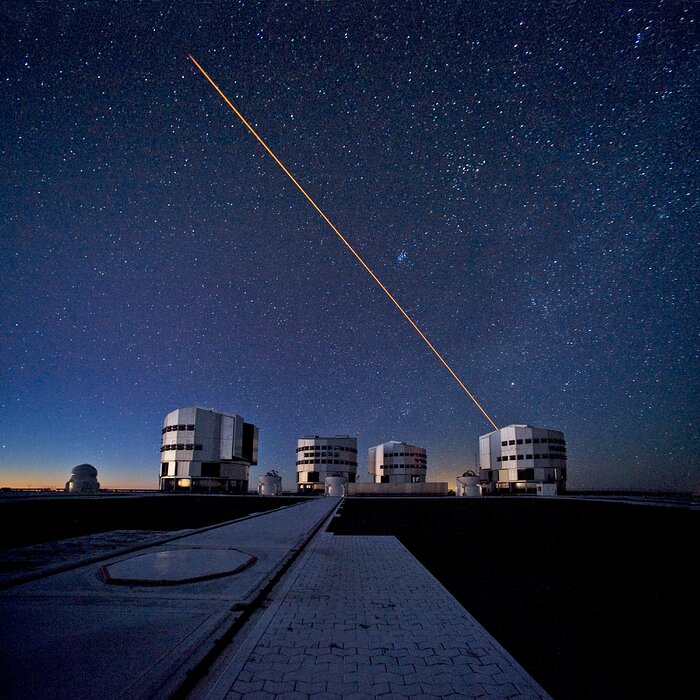 The ESO Very Large Telescope (VLT) during observations. In this picture, taken from the VLT platform looking north-northwest at twilight, the four 8.2-metre Unit Telescopes (UTs) are visible. From left to right, Antu, Kueyen, Melipal and Yepun, the Mapuche names for the VLT's giant telescopes. In front of the UTs are the four 1.8-metre Auxiliary Telescopes (ATs), entirely dedicated to interferometry, a technique which allows astronomers to see details up to 25 times finer than with the individual telescopes. The configuration of the ATs can be changed by moving them across the platform between 30 different observing positions. One of these positions is visible in the foreground, covered by a hexagonal pad. A reddish laser beam is being launched from UT4 (Yepun) to create an artificial star at an altitude of 90 km in the Earth´s mesosphere. This Laser Guide Star (LGS) is part of the Adaptive Optics system, which allows astronomers to remove the effects of atmospheric turbulence, producing images almost as sharp as if the telescope were in space. The bluish compact group of stars visible to the right of the laser beam is the Pleiades open cluster.

This photograph was taken by ESO Photo Ambassador Serge Brunier.