A Tale of Two Populations

On the basis of stellar spectra totalling more than 200 hours of effective exposure time with the 8.2-m VLT Kueyen telescope at Paranal (Chile), a team of astronomers [1] has made a surprising discovery about the stars in the giant southern globular cluster Omega Centauri. It has been known for some time that, contrary to other clusters of this type, this stellar cluster harbours two different populations of stars that still burn hydrogen in their centres. One population, accounting for one quarter of its stars, is bluer than the other. Using the FLAMES multi-object spectrograph that is particularly well suited to this kind of work, the astronomers found that the bluer stars contain more heavy elements than those of the redder population. This was exactly opposite to the expectation and they are led to the conclusion that the bluer stars have an overabundance of the light element helium of more than 50%. They are in fact the most helium rich stars ever found. But why is this so? The team suggests that this puzzle may be explained in the following way. First, a great burst of star formation took place during which all the stars of the red population were produced. As other normal stars, these stars transformed their hydrogen into helium by nuclear burning. Some of them, with masses of 10-12 times the mass of the Sun, soon thereafter exploded as supernovae, thereby enriching the interstellar medium in the globular cluster with helium. Next, the blue population stars formed from this helium-rich medium. This unexpected discovery provides important new insights into the way stars may form in larger stellar systems.

However, it appears that the more information astronomers acquire about the stars in this cluster, the less they seem to understand the origin of these stars. But now, new intriguing results from the ESO Very Large Telescope (VLT) may show a possible way of resolving the present, apparently contradictory results.

Last year, an international team of astronomers [1], using data from the Hubble Space Telescope (HST), showed that Omega Centauri, unlike all other globular clusters, possesses two distinct populations of stars burning hydrogen in their centre. Even more puzzling was the discovery that the bluer population was more rare than the redder one: they accounted for only a quarter of the total number of stars still burning hydrogen in their central core. This is exactly the opposite of what the astronomers had expected, based on the observations of more evolved stars in this cluster.

The same team of astronomers then went on to observe some of the stars from the two populations in this cluster by means of the FLAMES instrument on the Very Large Telescope at Paranal. They used the MEDUSA mode, allowing to obtain no less than 130 spectra simultaneously.

Twelve one-hour spectra were obtained for 17 stars of the blue population and the same number stars from the red one. These stars have magnitudes between 20 and 21, i.e., they are between 500,000 and 1 million times fainter than what can be seen with the unaided eye.

The individual spectra of stars from each population were then co-added. This produced a "mean" spectrum of a blue-population star and another of a red-population. Each of these spectra represents a total of no less than 204 hours of exposure time and accordingly provides information in unrivalled detail about these stars, especially in terms of their chemical composition.

From a careful study of the combined spectra, the astronomers were able to establish that - contrary to all prior expectations - the bluer stars are more "metal-rich" (by a factor two) than the redder ones. "The latter were found to have an abundance of elements more massive than helium corresponding to about 1/40 the solar abundance [2] ", explains Raffaele Gratton of INAF-Osservatorio Astronomico di Padova in Italy. "This is indeed very puzzling as current models of stars predict that the more metal-rich a star is, the redder it ought to be".

Giampaolo Piotto (University of Padova, Italy), leader of the team, thinks that there is a solution to this celestial puzzle: "The only way we can explain this discrepancy is by assuming that the two populations of stars have a different abundance of helium. We find that while the red stars have a normal helium abundance, the bluer stars must be enriched in helium by more than 50% with respect to the other population!"

These stars are thus the most helium-rich stars ever found, and not by just a few percent! It took some 8 billion years for the Milky Way Galaxy to increase its helium abundance from the primordial 24% value (created by the Big Bang) to the present solar 28% value, and yet in a globular cluster that formed only 1 or 2 billion years after the Big Bang, stars were produced with 39% of helium!

The obvious question is now: "Where does all this helium come from?"

Luigi Bedin (ESO), another member of the team, suggests that the solution might be connected to supernovae: "The scenario we presently favour is one in which the high helium content originates from material ejected during the supernovae explosions of massive stars. It is possible that the total mass of Omega Centauri was just right to allow the material expelled by high-mass supernovae to escape, while the matter from explosions of stars with about 10-12 times the mass of the Sun was retained."

According to this scenario, Omega Centauri must therefore have seen two generations of stars. The first generation, with primordial helium abundance, produced the redder stars. A few tens of million years later, the most massive stars of this first generation exploded as supernovae. The helium-enriched matter that was expelled during the explosions of stars with 10-12 times the mass of the Sun "polluted" the globular cluster. Then a second population of stars, the bluer ones, formed from this helium-rich gas.

The scientists acknowledge that certain problems still remain and that the last word may not yet have been said about this unusual globular cluster. But the new results constitute an important step towards the solution of the biggest mystery of all: why is Omega Centauri the only one among the galactic globular cluster that was able to produce super helium-rich stars?

[2]: Helium is the second most abundant chemical element in the Universe, after hydrogen. The Sun contains about 70% hydrogen and 28% helium. The rest, about 2%, is made of all elements more heavier than helium. They are commonly referred to by astronomers as "metals".

The research presented here appeared in the March 10 issue of the Astrophysical Journal, Vol. 621, p. 777 ("Metallicities on the Double Main Sequence of Omega Centauri Imply Large Helium Enhancement" by G. Piotto et al.) and is available for download as astro-ph/0412016. 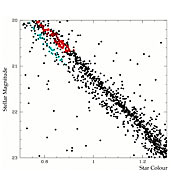 Afbeelding eso0509d
The Supernova scenario
Send us your comments!
Subscribe to receive news from ESO in your language
Accelerated by CDN77
Overeenkomsten & voorwaarden