The Universe was a more fertile place soon after it was formed than has previously been suspected. A team of French and Italian astronomers [1] made indeed the surprising discovery of a large and unknown population of distant galaxies observed when the Universe was only 10 to 30% its present age.

This breakthrough is based on observations made with the Visible Multi-Object Spectrograph (VIMOS) as part of the VIMOS VLT Deep Survey (VVDS). The VVDS started early 2002 on Melipal, one of the 8.2-m telescopes of ESO's Very Large Telescope Array [2].

In a total sample of about 8,000 galaxies selected only on the basis of their observed brightness in red light, almost 1,000 bright and vigorously star forming galaxies were discovered that were formed between 9 and 12 billion years ago (i.e. about 1,500 to 4,500 million years after the Big Bang).

"To our surprise, says Olivier Le Fèvre, from the Laboratoire d'Astrophysique de Marseille (France) and co-leader of the VVDS project, "this is two to six times higher than had been found previously. These galaxies had been missed because previous surveys had selected objects in a much more restrictive manner than we did. And they did so to accommodate the much lower efficiency of the previous generation of instruments."

While observations and models have consistently indicated that the Universe had not yet formed many stars in the first billion years of cosmic time, the discovery announced today by scientists calls for a significant change in this picture. The astronomers indeed find that stars formed two to three times faster than previously estimated.

"These observations will demand a profound reassessment of our theories of the formation and evolution of galaxies in a changing Universe", says Gianpaolo Vettolani, the other co-leader of the VVDS project, working at INAF-IRA in Bologna (Italy).

These results are reported in the September 22 issue of the journal Nature (Le Fèvre et al., "A large population of galaxies 9 to 12 billion years back in the life of the Universe").

[1] The team of French and Italian researchers is co-led by Olivier Le Fèvre, director of the Laboratoire d'Astrophysique de Marseille (LAM) in France and by Gianpaolo Vettolani (INAF-IRA, Bologna) in Italy. It has been successful in the study of the history of galaxies from their formation early in the life of the Universe until the present epoch by combining fundamental research with the construction of specialized instruments uniquely suited to this task. The VIMOS (Visible Multi-Object Spectrograph) instrument has been designed using this team's expertise in instrument building, and was build by a French-Italian consortium financed by ESO, CNRS and the Provence-Alpes Côte d'Azur region in France, and by CNR, INAF and the Ministry of Education in Italy.

[2] With VIMOS, astronomers are able to measure the distances and the properties of up to 1,000 very distant galaxies in one single observation, and to complete in a few hours, observations that would have taken months only a few years ago. With capabilities up to ten times more productive than competing instruments, this instrument offers the possibility for the first time to conduct an unbiased census of the distant Universe. Using the high efficiency of the VIMOS instrument, the VVDS can thus "simply" observe, in a given patch of the sky, all galaxies brighter than magnitude 24 in the red, that is, galaxies that are up to 16 million times fainter than what the unaided eye can see. For each galaxy in this area, a spectrum is taken. From the measured redshift, the astronomers can determine the galaxy's distance. 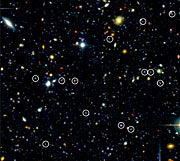 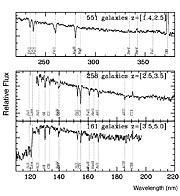 PR Image eso0530b
Average spectra of distant galaxies
Send us your comments!
Subscribe to receive news from ESO in your language
Accelerated by CDN77
Terms & Conditions