Allo, Allo? A Star is Ringing

Astronomers have used ESO's Very Large Telescope in Chile and the Anglo-Australian Telescope in eastern Australia as a 'stellar stethoscope' to listen to the internal rumblings of a nearby star. The data collected with the VLT have a precision better than 1.5 cm/s, or less than 0.06 km per hour!

By observing the star with two telescopes at the same time, the astronomers have made the most precise and detailed measurements to date of pulsations in a star similar to our Sun. They measured the rate at which the star's surface is pulsing in and out, giving clues to the density, temperature, chemical composition and rotation of its inner layers - information that could not be obtained in any other way.

The astronomers from Denmark, Australia, and the USA [1] used Kueyen, one of the four 8.2-m Unit Telescopes of ESO's Very Large Telescope (VLT) at Cerro Paranal in Chile, and the 3.9-m Anglo-Australian Telescope (AAT) in New South Wales (Australia), to study the star Alpha Centauri B, one of our closest neighbours in space, about 4.3 light-years away.

Churning gas in the star's outer layers creates low-frequency sound waves that bounce around the inside of the star, causing it to ring like a bell. This makes the star's surface pulsate in and out by very tiny amounts - only a dozen metres or so every four minutes [2]. Astronomers can detect these changes by measuring the small, associated wavelength shifts.

The researchers sampled the light from Alpha Centauri B for seven nights in a row, making more than 5 000 observations in all. At the VLT, 3379 spectra were obtained with typical exposure times of 4 seconds and a median cadence of one exposure every 32 seconds! At the AAT 1642 spectra were collected, with typical exposures of 10 s, taken every 90 s.

"From this unique dataset, we were able to determine as many as 37 different patterns (or modes) of oscillation", says Hans Kjeldsen, from University of Aarhus (Denmark) and lead author of the paper describing the results [3].

The astronomers also measured the mode lifetimes (how long the oscillations last), the frequencies of the modes, and their amplitudes (how far the surface of the star moves in and out). Such measurements are a huge technical challenge. Indeed, the star' surface moves slowly, at the tortoise-like speed of 9 cm a second, or about 300 metre an hour. The astronomers borrowed their high-precision measurement technique from the planet-hunters, who also look for slight Doppler shifts in starlight.

"So much of what we think we know about the universe rests on the ages and properties of stars," said Tim Bedding, from the University of Sydney and co-author of the study. "But there is still a great deal we don't know about them."

By using two telescopes at different sites the astronomers were able to observe the Alpha Centauri B as continuously as possible.

"That's a huge advantage, because gaps in the data introduce ambiguity," said Bedding. "The success of the observations also depended on the very stable spectrographs attached to the two telescopes - UVES at the VLT and UCLES at the AAT - which analysed the star's light."

[2] By comparison, the star is more than a million kilometres wide.

[3] The research is described in a paper published on December 20 by the Astrophysical Journal ("Solar-like oscillations in alpha Centauri B.", by H. Kjeldsen et al.). It is available for download at http://arxiv.org/abs/astro-ph/0508609 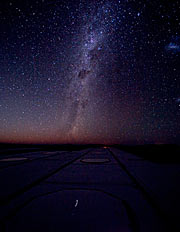 PR Image eso0542b
Sky above Paranal
Send us your comments!
Subscribe to receive news from ESO in your language
Accelerated by CDN77
Terms & Conditions