How to Steal a Million Stars?

Based on observations with ESO's Very Large Telescope, a team of Italian astronomers reports [1] that the stellar cluster Messier 12 must have lost to our Milky Way galaxy close to one million low-mass stars.

"In the solar neighbourhood and in most stellar clusters, the least massive stars are the most common, and by far", said Guido De Marchi (ESA), lead author of the study. "Our observations with ESO's VLT show this is not the case for Messier 12."

The team, which also includes Luigi Pulone and Francesco Paresce (INAF, Italy), measured the brightness and colours of more than 16,000 stars within the globular cluster Messier 12 [2] with the FORS1 multi-mode instrument attached to one of the Unit Telescopes of ESO's VLT at Cerro Paranal (Chile). The astronomers could study stars that are 40 million times fainter than what the unaided eye can see (magnitude 25).

Located at a distance of 23,000 light years in the constellation Ophiuchus (The Serpent-holder), Messier 12 got its name by being the 12th entry in the catalogue of nebulous objects compiled in 1774 by French astronomer and comet chaser Charles Messier. It is also known to astronomers as NGC 6218 and contains about 200,000 stars, most of them having a mass between 20 and 80 percent of the mass of the Sun.

"It is however clear that Messier 12 is surprisingly devoid of low-mass stars", said De Marchi. "For each solar-like star, we would expect roughly four times as many stars with half that mass. Our VLT observations only show an equal number of stars of different masses."

Globular clusters move in extended elliptical orbits that periodically take them through the densely populated regions of our Galaxy, the plane, then high above and below, in the 'halo'. When venturing too close to the innermost and denser regions of the Milky Way, the 'bulge', a globular cluster can be perturbed, the smallest stars being ripped away.

"We estimate that Messier 12 lost four times as many stars as it still has", said Francesco Paresce. "That is, roughly one million stars must have been ejected into the halo of our Milky Way."

The total remaining lifetime of Messier 12 is predicted to be about 4.5 billion years, i.e. about a third of its present age. This is very short compared to the typical expected globular cluster's lifetime, which is about 20 billion years.

The same team of astronomers had found in 1999, another example of a globular cluster that lost a large fraction of its original content.

The scientists hope to discover and study many more clusters like these, since catching clusters while being disrupted should clarify the dynamics of the process that shaped the halo of our home galaxy, the Milky Way.

A press release on this is also issued by INAF in Italian and is available at www.inaf.it/comunicati_stampa/cs070206/Inaf-04-06.html.

[2] Messier 12 is one of about 200 globular clusters known in our Galaxy. These are large groupings of 10,000 to more than a million stars that were formed together in the youth of the Milky Way, about 12 to 13 billion years ago. Globular clusters are a key tool for astronomers, because all the stars in a globular cluster share a common history. They were all born together, at the same time and place, and only differ from one another in their mass. By accurately measuring the brightness of the stars, astronomers can determine their relative sizes and stage of evolution precisely. Globular clusters are thus very helpful for testing theories of how stars evolve. 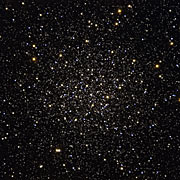 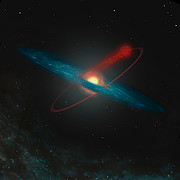 PR Image eso0604b
Losing stars to the Milky Way (artist's impression)
Send us your comments!
Subscribe to receive news from ESO in your language
Accelerated by CDN77
Terms & Conditions