A record two-hour observation of Jupiter using a superior technique to remove atmospheric blur has produced the sharpest whole-planet picture ever taken from the ground. The series of 265 snapshots obtained with the Multi-Conjugate Adaptive Optics Demonstrator (MAD) prototype instrument mounted on ESO's Very Large Telescope (VLT) reveal changes in Jupiter's smog-like haze, probably in response to a planet-wide upheaval more than a year ago.

Being able to correct wide field images for atmospheric distortions has been the dream of scientists and engineers for decades. The new images of Jupiter prove the value of the advanced technology used by MAD, which uses two or more guide stars instead of one as references to remove the blur caused by atmospheric turbulence over a field of view thirty times larger than existing techniques [1].

"This type of adaptive optics has a big advantage for looking at large objects, such as planets, star clusters or nebulae," says lead researcher Franck Marchis, from UC Berkeley and the SETI Institute in Mountain View, California, USA. "While regular adaptive optics provides excellent correction in a small field of view, MAD provides good correction over a larger area of sky. And in fact, were it not for MAD, we would not have been able to perform these amazing observations."

MAD allowed the researchers to observe Jupiter for almost two hours on 16 and 17 August 2008, a record duration, according to the observing team. Conventional adaptive optics systems using a single Jupiter moon as reference cannot monitor Jupiter for so long because the moon moves too far from the planet. The Hubble Space Telescope cannot observe Jupiter continuously for more than about 50 minutes, because its view is regularly blocked by the Earth during Hubble's 96-minute orbit.

Using MAD, ESO astronomer Paola Amico, MAD project manager Enrico Marchetti and Sébastien Tordo from the MAD team tracked two of Jupiter's largest moons, Europa and Io – one on each side of the planet – to provide a good correction across the full disc of the planet. "It was the most challenging observation we performed with MAD, because we had to track with high accuracy two moons moving at different speeds, while simultaneously chasing Jupiter," says Marchetti.

With this unique series of images, the team found a major alteration in the brightness of the equatorial haze, which lies in a 16 000-kilometre wide belt over Jupiter's equator [2]. More sunlight reflecting off upper atmospheric haze means that the amount of haze has increased, or that it has moved up to higher altitudes. "The brightest portion had shifted south by more than 6000 kilometres," explains team member Mike Wong.

This conclusion came after comparison with images taken in 2005 by Wong and colleague Imke de Pater using the Hubble Space Telescope. The Hubble images, taken at infrared wavelengths very close to those used for the VLT study, show more haze in the northern half of the bright Equatorial Zone, while the 2008 VLT images show a clear shift to the south.

"The change we see in the haze could be related to big changes in cloud patterns associated with last year's planet-wide upheaval, but we need to look at more data to narrow down precisely when the changes occurred," declares Wong.

[1] Telescopes on the ground suffer from a blurring effect introduced by atmospheric turbulence. This turbulence causes the stars to twinkle in a way that delights the poets but frustrates the astronomers, since it smears out the fine details of the images. However, with Adaptive Optics (AO) techniques, this major drawback can be overcome so that the telescope produces images that are as sharp as theoretically possible, i.e., approaching conditions in space. Adaptive Optics systems work by means of a computer-controlled deformable mirror that counteracts the image distortion introduced by atmospheric turbulence. It is based on real-time optical corrections computed from image data obtained by a 'wavefront sensor' (a special camera) at very high speed, many hundreds of times each second. Present AO systems can only correct the effect of atmospheric turbulence in a very small region of the sky — typically 15 arcseconds or less — the correction degrading very quickly when moving away from the central axis. Engineers have therefore developed new techniques to overcome this limitation, one of which is multi-conjugate adaptive optics. See ESO 19/07 for more details on the Multi-Conjugate Adaptive Optics Demonstrator (MAD) prototype instrument.

[2] The haze, which could be the nitrogen compound hydrazine — used on Earth as a rocket propellant — or possibly frozen crystals of ammonia, water or ammonium hydrosulphide from deeper in the gaseous planet, is very prominent in infrared images. Because visible light can penetrate to deeper levels than light at the infrared wavelengths detected by MAD (around 2 microns), optical telescopes see light reflected from deeper, thicker clouds lying beneath the haze. The haze behaves somewhat like particles in the tops of thunderheads on Earth (known as cumulonimbus anvils) or in the ash plumes from large volcanic eruptions, which rise into the upper atmosphere and spread around the world. On Jupiter, ammonia injected into the upper atmosphere also interacts with sunlight to form hydrazine, which condenses into a mist of fine ice particles. The hydrazine chemistry in Jupiter’s atmosphere is similar to that occurring in the Earth’s atmosphere after a volcanic eruption, when sulphur dioxide is converted by solar ultraviolet light into sulphuric acid. 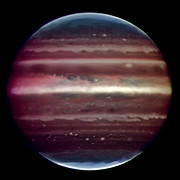 PR Video eso0833a
Sharpening up Jupiter
Send us your comments!
Subscribe to receive news from ESO in your language
Accelerated by CDN77
Terms & Conditions