Beautiful Image of a Cosmic Sculpture

Today ESO has released a dramatic new image of NGC 346, the brightest star-forming region in our neighbouring galaxy, the Small Magellanic Cloud, 210 000 light-years away towards the constellation of Tucana (the Toucan). The light, wind and heat given off by massive stars have dispersed the glowing gas within and around this star cluster, forming a surrounding wispy nebular structure that looks like a cobweb. NGC 346, like other beautiful astronomical scenes, is a work in progress, and changes as the aeons pass. As yet more stars form from loose matter in the area, they will ignite, scattering leftover dust and gas, carving out great ripples and altering the face of this lustrous object.

NGC 346 spans approximately 200 light-years, a region of space about fifty times the distance between the Sun and its nearest stellar neighbours. Astronomers classify NGC 346 as an open cluster of stars, indicating that this stellar brood all originated from the same collapsed cloud of matter. The associated nebula containing this clutch of bright stars is known as an emission nebula, meaning that gas within it has been heated up by stars until the gas emits its own light, just like the neon gas used in electric store signs.

Many stars in NGC 346 are relatively young in cosmic terms with their births dating back only a few million years or so (eso0834). Powerful winds thrown off by a massive star set off this recent round of star birth by compressing large amounts of matter, the first critical step towards igniting new stars. This cloud of material then collapses under its own gravity, until some regions become dense and hot enough to roar forth as a brilliantly shining, nuclear fusion-powered furnace — a star, illuminating the residual debris of gas and dust. In sufficiently congested regions like NGC 346, with high levels of recent star birth, the result is a glorious, glowing vista for our telescopes to capture.

This particular image was obtained using the Wide Field Imager (WFI) instrument at the MPG/ESO 2.2-metre telescope at the La Silla Observatory in Chile. Images like this help astronomers chronicle star birth and evolution, while offering glimpses of how stellar development influences the appearance of the cosmic environment over time. 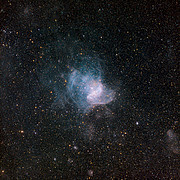 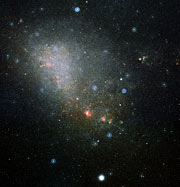 PR Video eso1008b
Close-up zoom on the star-forming region NGC 346
Send us your comments!
Subscribe to receive news from ESO in your language
Accelerated by CDN77
Terms & Conditions