A Star Cluster in the Wake of Carina

This colourful new image from the MPG/ESO 2.2-metre telescope at ESO's La Silla Observatory in Chile shows the star cluster NGC 3590. These stars shine brightly in front of a dramatic landscape of dark patches of dust and richly hued clouds of glowing gas. This small stellar gathering gives astronomers clues about how these stars form and evolve — as well as giving hints about the structure of our galaxy's pinwheeling arms.

NGC 3590 is a small open cluster of stars around 7500 light-years from Earth, in the constellation of Carina (The Keel). It is a gathering of dozens of stars loosely bound together by gravity and is roughly 35 million years old.

This cluster is not just pretty; it is very useful to astronomers. By studying this particular cluster — and others nearby — astronomers can explore the properties of the spiral disc of our galaxy, the Milky Way. NGC 3590 is located in the largest single segment of a spiral arm that can be seen from our position in the galaxy: the Carina spiral feature.

The Milky Way has multiple spiral arms, long curved streams of gas and stars stretching out from the galactic centre. These arms — two major star-filled arms, and two less populated minor arms — are each named after the constellations in which they are most prominent [1]. The Carina spiral feature is seen from Earth as a patch of sky heavily populated with stars, in the Carina-Sagittarius minor arm.

The name of this arm — Carina, or The Keel — is quite appropriate. These spiral arms are actually waves of piled up gas and stars sweeping through the galactic disc, triggering sparkling bursts of star formation and leaving clusters like NGC 3590 in their wake. By finding and observing young stars like those in NGC 3590, it is possible to determine the distances to the different parts of this spiral arm, telling us more about its structure.

Typical open clusters can contain anything from a few tens to a few thousands of stars, and provide astronomers with clues about stellar evolution. The stars in a cluster like NGC 3590 are born at around the same time from the same cloud of gas, making these clusters perfect test sites for theories on how stars form and evolve.

This image from the Wide Field Imager (WFI) on the MPG/ESO 2.2-metre telescope at La Silla, shows the cluster and the gas clouds surrounding it, which glow in orange and red hues due to the radiation coming from nearby hot stars. WFI's large field of view also captures a colossal number of background stars.

To obtain this image, multiple observations were made using different filters to capture the different colours of the scene. This image was created by combining images taken in the visible and infrared parts of the spectrum, and a special filter that collected only light coming from glowing hydrogen.

[1] These four arms are named the Carina-Sagittarius, Norma, Scutum-Centaurus, and Perseus arms. 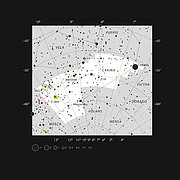 PR Video eso1416b
The colourful star cluster NGC 3590
Send us your comments!
Subscribe to receive news from ESO in your language
Accelerated by CDN77
Terms & Conditions