Part of the world-wide effort to scan and identify near-Earth objects, the European Space Agency’s Test-Bed Telescope 2 (TBT2), a technology demonstrator hosted at ESO’s La Silla Observatory in Chile, has now started operating. Working alongside its northern-hemisphere partner telescope, TBT2 will keep a close eye on the sky for asteroids that could pose a risk to Earth, testing hardware and software for a future telescope network.

“To be able to calculate the risk posed by potentially hazardous objects in the Solar System, we first need a census of these objects. The TBT project is a step in that direction,” says Ivo Saviane, the site manager for ESO’s La Silla Observatory in Chile.

The project, which is a collaboration between the European Southern Observatory (ESO) and the European Space Agency (ESA), “is a test-bed to demonstrate the capabilities needed to detect and follow-up near-Earth objects with the same telescope system,” says ESA’s Head of the Optical Technologies Section Clemens Heese, who is leading this project.

The 56-cm telescope at ESO’s La Silla and TBT1, its identical counterpart located at the ESA’s deep-space ground station at Cebreros in Spain, will act as precursors to the planned ‘Flyeye’ telescope network, a separate project that ESA is developing to survey and track fast-moving objects in the sky. This future network will be entirely robotic; software will perform real-time scheduling of observations and, at the end of the day, it will report the positions and other information about the objects detected. The TBT project is designed to show that the software and hardware work as expected.

“The start of observations of TBT2 at La Silla will enable the observing system to work in its intended two-telescope configuration, finally fulfilling the project’s objectives,” says Heese.

While seriously harmful asteroid impacts on Earth are extremely rare, they are not inconceivable. The Earth has been periodically bombarded with both large and small asteroids for billions of years, and the 2013 Chelyabinsk meteor event, which caused some 1600 injuries, most due to flying splinters and broken glass, further raised the public’s awareness of the threat posed by near-Earth objects. Larger objects do more damage, but are thankfully easier to spot and the orbits of known large asteroids are already thoroughly studied. However, it is estimated that there are large numbers of smaller, yet-undiscovered objects we are unaware of that could do serious damage if they were to hit a populated area.

That’s where TBT and the future planned network of Flyeye telescopes come in. Once fully operational the network’s design would allow it to survey the night sky to track fast-moving objects, a significant advancement in Europe’s capacity to spot potentially hazardous near-Earth objects.

TBT is part of an ongoing inter-organisational effort to build a more complete picture of these objects and the potential risks they pose. This project builds on ESO’s previous involvement in protecting the Earth from potentially dangerous near-Earth objects. Both ESO and ESA are active in the United Nations-endorsed International Asteroid Warning Network and many observations of these objects have been performed with ESO’s telescopes. ESO’s New Technology Telescope at La Silla, for example, has been used for observations of small near-Earth asteroids in support of the European NEOShield-2 project.

The ongoing inter-organisational collaboration between ESO and ESA is particularly significant in the study of near-Earth objects. While TBT is the first telescope project to be realised under a cooperation agreement between the two organisations, ESO has been helping ESA track potentially dangerous objects since 2014, by using its Very Large Telescope at Paranal Observatory to observe very faint objects. These efforts combined are a significant leap forward for the worldwide search and management of asteroids, and have already proved useful in ruling out collisions of asteroids with the Earth.

The installation and first light of TBT2 at ESO’s La Silla Observatory was achieved under strict health and safety conditions. ESO's observatories temporarily stopped operations last year due to the COVID-19 pandemic, but have since resumed science observations under restrictions that ensure the safety and protection of everyone at the sites.

The European Space Agency (ESA) provides Europe’s gateway to space. ESA is an intergovernmental organisation, created in 1975, with the mission to shape the development of Europe’s space capability and ensure that investment in space delivers benefits to the citizens of Europe and the world. ESA has 22 Member States: Austria, Belgium, the Czech Republic, Denmark, Estonia, Finland, France, Germany, Greece, Hungary, Ireland, Italy, Luxembourg, the Netherlands, Norway, Poland, Portugal, Romania, Spain, Sweden, Switzerland and the United Kingdom. Slovenia is an Associate Member. ESA has established formal cooperation with seven Member States of the EU. Canada takes part in some ESA programmes under a Cooperation Agreement. By coordinating the financial and intellectual resources of its members, ESA can undertake programmes and activities far beyond the scope of any single European country. It is working in particular with the EU on implementing the Galileo and Copernicus programmes as well as with Eumetsat for the development of meteorological missions. ESA develops the launchers, spacecraft and ground facilities needed to keep Europe at the forefront of global space activities. Today, it develops and launches satellites for Earth observation, navigation, telecommunications and astronomy, sends probes to the far reaches of the Solar System and cooperates in the human exploration of space. ESA also has a strong applications programme developing services in Earth observation, navigation and telecommunications. 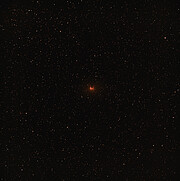 PR Video eso2107c
Artist's animation of incoming asteroid
Send us your comments!
Subscribe to receive news from ESO in your language
Accelerated by CDN77
Terms & Conditions