Serpent in the sky captured with ESO telescope

A myriad of stars is revealed behind the faint orange glow of the Sh2-54 nebula in this new infrared image. Located in the constellation Serpens, this stunning stellar nursery has been captured in all its intricate detail using the Visible and Infrared Survey Telescope for Astronomy (VISTA) based at ESO’s Paranal Observatory in Chile.

When the ancients looked up at the night sky they saw random patterns in the stars. The Greeks, for instance, named one of these “constellations” Serpens, because of its resemblance to a snake. What they wouldn’t have been able to see is that at the tail end of this constellation there is a wealth of stunning astronomical objects. These include the Eagle, the Omega and the Sh2-54 nebulae; the last of these is revealed, in a new light, in this spectacular infrared image.

Nebulae are vast clouds of gas and dust from which stars are born. Telescopes have allowed astronomers to identify and analyse these rather faint objects in exquisite detail. The nebula shown here, located about 6000 light-years away, is officially called Sh2-54; the “Sh” refers to the US astronomer Stewart Sharpless, who catalogued more than 300 nebulae in the 1950s.

As the technology used to explore the Universe progresses, so too does our understanding of these stellar nurseries. One of these advances is the ability to look beyond the light that can be detected by our eyes, such as infrared light. Just as the snake, the namesake of this nebula, evolved the ability to sense infrared light to better understand its environment, so too have we developed infrared instruments to learn more about the Universe.

Whilst visible light is easily absorbed by clouds of dust in nebulae, infrared light can pass through the thick layers of dust almost unimpeded. The image here therefore reveals a wealth of stars hidden behind the veils of dust. This is particularly useful as it allows scientists to study what happens in stellar nurseries in much greater detail, and thus learn more about how stars form.

This image was captured in infrared light using the sensitive 67-million-pixel camera on ESO’s VISTA telescope at Paranal Observatory in Chile. It was taken as part of the VVVX survey — the VISTA Variables in the Via Láctea eXtended survey. This is a multi-year project that has repeatedly observed a large portion of the Milky Way at infrared wavelengths, providing key data to understand stellar evolution.

The European Southern Observatory (ESO) enables scientists worldwide to discover the secrets of the Universe for the benefit of all. We design, build and operate world-class observatories on the ground — which astronomers use to tackle exciting questions and spread the fascination of astronomy — and promote international collaboration in astronomy. Established as an intergovernmental organisation in 1962, today ESO is supported by 16 Member States (Austria, Belgium, the Czech Republic, Denmark, France, Finland, Germany, Ireland, Italy, the Netherlands, Poland, Portugal, Spain, Sweden, Switzerland and the United Kingdom), along with the host state of Chile and with Australia as a Strategic Partner. ESO’s headquarters and its visitor centre and planetarium, the ESO Supernova, are located close to Munich in Germany, while the Chilean Atacama Desert, a marvellous place with unique conditions to observe the sky, hosts our telescopes. ESO operates three observing sites: La Silla, Paranal and Chajnantor. At Paranal, ESO operates the Very Large Telescope and its Very Large Telescope Interferometer, as well as survey telescopes such as VISTA. Also at Paranal ESO will host and operate the Cherenkov Telescope Array South, the world’s largest and most sensitive gamma-ray observatory. Together with international partners, ESO operates ALMA on Chajnantor, a facility that observes the skies in the millimetre and submillimetre range. At Cerro Armazones, near Paranal, we are building “the world’s biggest eye on the sky” — ESO’s Extremely Large Telescope. From our offices in Santiago, Chile we support our operations in the country and engage with Chilean partners and society. 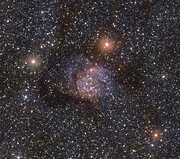 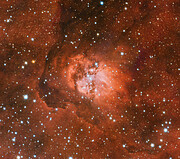 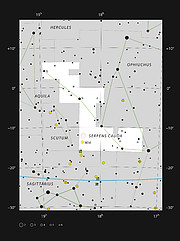 The Sh2-54 nebula in visible and infrared light
Send us your comments!
Subscribe to receive news from ESO in your language
Accelerated by CDN77
Terms & Conditions