Important Events in the Southern Sky

In these days, northern astronomers have reason to envy their colleagues in the south. By chance, the two main events in observational astronomy at this moment both occur deep in the southern sky and they can therefore not be observed from the astronomical centres in the northern hemisphere.

These are the occurence of the brightest supernova since 383 years, SN 1987A in the Large Magellanic Cloud (LMC) (see eso8704, eso8705 and eso8706). and the relatively close approach to the earth of naked-eye Comet Wilson on May 2, 1987. By a curious coincidence, the two objects were seen only 5 degrees apart on May 3, when the comet moved rapidly across the sky, southeast of the LMC. However, while SN 1987A is situated at a distance of about 180.000 light years, Comet Wilson was only 93.5 million kilometres from the earth.

The brightness has continued to increase and by mid-May it attained magnitude 2.8, that is about half the intensity of the Polar Star. The rate of increase by mid-April was about 3 % per day, slowing to 1.5 percent per day in early May. It would appear that a plateau has now been reached. Whether or not this is the maximum still remains to be seen. The time from the initial rise to the present plateau, almost 3 months, is unexpectedly long and has never been observed for any other supernova.

An new reduction of the IUE (International Ultraviolet Explorer) satellite data indicates that the central star of Sanduleak -69 202 has disappeared. It is therefore very likely that it was this star that exploded. Its spectral type was measured at ESO in the mid 1970s and showed it to be a hot supergiant star, which according to current evolutionary theories should not yet have reached the critical phase. Theoretical astrophysicists are now confronted with the problems of why and how this star blew up at this stage of its evolution.

The expansion velocity of the matter which was ejected into interstellar space at the explosion has now decreased to about 5000 km/sec. Despite continuous monitoring by fast photometry at ESO La Silla, no brightness fluctuations have yet been observed, which could be ascribed to a rapidly rotating neutron star (pulsar) at the centre of the supernova. (Some astronomers think that the pulsar was transformed into a black hole within a few hours after the explosion). Infrared speckle interferometry with the ESO 3.6 m telescope on May 8 and 9 did not show any extended emission around the supernova as might be expected from an infrared echo in surrounding dust, but the weather conditions were not optimal during these observations.

The observations at La Silla continue. Meanwhile ESO is preparing for the first full-scale international meeting about “SN 1987A in the LMC, which will take place at the ESO Headquarters in Garching bei München, on July 6 - 8, 1987. More than 100 supernova specialists from all continents intend to participate. The topics will include all aspects of supernova research, from the precursor star to the evolution of the envelope and interaction with the surrounding interstellar medium.

Members of the Press who would like to participate in this meeting, are kindly requested to contact the ESO Information and Photographic Service soonest possible. A Press Conference may be organized at ESO on July 8, immediately following the meeting.

Observations have commenced at La Silla of this comet, which was discovered last year by Christine Wilson at the Palomar Observatory. It would appear that the cautious magnitude predictions were essentially correct and by early May, when it was closest to the earth, the comet reached magnitude 5. Photos are being obtained with the ESO 1 m Schmidt telescope (one accompanies this Press Release) and spectral observations are carried out with the ESO 1.5 m telescope. Moderate tail emissions of CO+ and H2O+ are seen, extending up to about 2 arcminutes from the center.

The observations of Comet Wilson are of particular interest because of the possibility of direct comparison of this “new" comet, which moves in a hyperbolic (open) orbit and therefore never before has been near the Sun, with “old", periodical Comet Halley, an object of much observational attention last year. 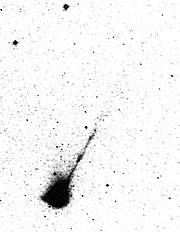 PR Image eso8707a
The long ion tail of comet Wilson
Send us your comments!
Subscribe to receive news from ESO in your language
Accelerated by CDN77
Terms & Conditions