The most massive stars may be less heavy than thought before. Recent observations with two telescopes at the ESO La Silla observatory have now shown that a star in the Large Magellanic Cloud, long believed to be one of the most massive in existence, is in fact multiple and consists of a very compact cluster of hot, young stars. This discovery may have important implications for the theory of stellar birth and the determination of distances in the Universe.

From earlier observations, a mass of more than 120 times that of the Sun was estimated for the bright blue star Sanduleak -66°41 in the Large Magellanic Cloud. This high value was difficult to reconcile with theoretical calculations, which showed that stars with masses well above 60 times that of the Sun should be unstable.

However, observations with the 3.6 m and 2.2 m telescopes at the ESO observatory were carried out in March 1988, under very good conditions.

Extremely sharp images of this star were obtained by a group of three ESO astronomers, M. Heydari-Malayeri (on leave from Observatoire de Paris), P. Magain and M. Remy. They showed for the first time that Sanduleak -66°41 is not a single star, but a very compact cluster of hot, blue stars.

With advanced image processing methods, the astronomers were able to further "sharpen" the images. This allowed them to split the original image into no less than six components, each corresponding to a single star. There are indications that the central star (see figure) may itself be double or even multiple.

The birth of star clusters

Other, apparently very heavy stars have been found to be double or triple. Thus, there is now some evidence that most of these objects may indeed consist of several stars which are very close in space. Stars in such clusters are born at the same time by condensation out of dense, interstellar clouds of gas and dust. The evolution of the individual stars depends on their mass; the heavier ones evolve faster than those with less mass.

The star Sanduleak -66°202 that exploded as Supernova 1987A on February 23 last year, was the most massive member of a group of a few stars, similar to the cluster now found at Sanduleak -66°41 However, the exploding star was already at a late stage of its evolution, whereas Sanduleak -66°41 is at an early stage. Still, it will not live very long, when compared to stars like the Sun. Whereas the Sun will remain stable during another 5000 million years or more, very heavy stars use their hydrogen fuel at a prodigious rate and become unstable after a few million years at most.

Distances in the universe

There is another implication of this discovery. Since the heaviest stars are also the brightest, such objects can be seen over great distances, also in galaxies far out in space. It is usually assumed that they are similar to heavy stars in the Milky Way Galaxy and its satellite galaxies, the Magellanic Clouds, and therefore radiate the same, known amount of light. Light is dimmed by the square of the distance, so from the observed brightness of such stars it is possible to determine the distances to the galaxies in which they reside. This method is an important tool to establish the scale of distances in the Universe.

However, if these objects are not individual, massive stars, but rather clusters of stars, then this assumption is no longer valid. At the great distances of galaxies, a compact cluster could not be resolved into individual stars and would look exactly like a single star. But the combined cluster stars emit more light than a single star.

At a given observed brightness in the sky, the cluster is farther away than the star. This means that if the brightest "stars" in other galaxies are not stars, but clusters of stars, then the distances to these galaxies are larger than previously thought.

This question is therefore of great cosmological interest and must now be investigated in detail.

The detailed findings of the ESO astronomers have been submitted for publication in the European journal Astronomy & Astrophysics. 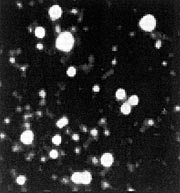 PR Image eso8903b
Globular cluster Centauri observed with the ESO NTT
Send us your comments!
Subscribe to receive news from ESO in your language
Accelerated by CDN77
Terms & Conditions