Everybody knows the Crab Nebula - that famous object in the northern constellation Taurus (The Bull). It is the remnant of a supernova explosion in the year 1054 and has been studied with all available astronomical techniques. But this nebula does not really resemble the animal whose name it carries! Whoever attached this name to it by the middle of the last century must have had a well developed imagination. Now a "real crab'' has been discovered, a nebula in the southern constellation of Centaurus (The Centaur), which from its appearance on recent pictures made with telescopes at the La Silla Observatory would seem to have more right to associate with crustaceans. To avoid confusion, astronomers now refer to the new object as the "Southern Crab".

The prosaic name of this object is Hen 2-104, meaning that it was first catalogued as no. 104 in the second list of emission-line stars, compiled by American astronomer-astronaut Karl Henize in 1967. At that time, it was thought to be starlike, and nothing was known about the extended nebula around it until recently, when ESO astronomer Hugo E. Schwarz, together with Colin Aspin (UK Joint Astronomy Centre, Hawaii) and Julie H. Lutz (Washington State University, Seattle), obtained direct CCD images with the 2.2 m telescope at La Silla. By means of suitable optical filters, pictures were made in various colours, corresponding to the emitted light from several elements, e.g. hydrogen, sulphur, nitrogen and oxygen. Because different physical conditions prevail in the various parts of the object, the apparent shape of the nebula depends on the colour in which it is observed.

The attached B/W photo [1] shows what the astronomers saw on the monitor screen in the light of ionized nitrogen ([NII] λ6584 Å), once the image had been computed processed to remove all detector induced effects. No wonder that the object quickly received its present name!

It is one thing is to obtain pretty pictures, but quite another to explain what they mean. The "Southern Crab" is not easy to understand, and the explanation below is only a first attempt.

Symbiotic stars are binaries in which a small hot star (white dwarf or main sequence star) orbits around a red giant star. These systems are often surrounded by an envelope of gas or dust; those with gas are known as S-types and those with dust as D-types.

Their spectra show strong emission lines, and their brightness varies in an irregular way, reflecting the energetic processes that take place in and near these unusual objects. Especially the D-type symbiotic stars emit strongly in the infrared part of the spectrum.

There is mounting evidence that the D-type symbiotics, of which no more than about 20 systems are known, are on their way to becoming planetary nebulae (PNe), a late evolutionary stage for stars of medium mass. Such objects are seen in the sky as gaseous nebulae, surrounding small hot stars. (Despite their name, planetary nebula have nothing to do with the planets in our solar system; it refers to the fact that some of the brightest of them are seen in telescopes as small disks.)

Some D-type symbiotic stars are expected to be in a very rapid phase of their evolution, lasting only a few thousand years. Since the normal stellar lifetime is of the order of 100 million to 1000 million years, this transitory phase lasts only a very small fraction of the star's lifetime, and the phenomenon must therefore be quite rare among the stars we see in the sky. (In comparison, this would correspond to a single hour only during the entire life of a human being!)

Hen 2-104 is possibly one of these few D-type symbiotic stars, and the present observations were made during a search for proto-planetary nebulae (PPNe), that is objects which are in the transition phase and on the verge of becoming planetary nebulae.

Interpretation of the Southern Crab

Against this background, it is now possible to interpret provisionally the crab-like appearance of Hen 2-104.

The central, hot and small star in the binary system has recently formed a disk of material in its equatorial plane, which is made up of gas and dust that has been transfered by rapid mass loss from its companion, a red giant star. When a fast, stellar wind (mainly energetic atoms and ions) some time ago started to ``blow" from the central star, the surrounding disk prevented this material to flow in the equatorial direction. It was, however, able to escape in the polar directions and soon gave rise to the two "bubbles" which can now be seen as the "legs of the Crab". Since we are looking through these bubbles, they appear brighter at the edges than in the central parts - this is refered to as "limb brightening".

Then a highly collimated and very fast wind started to blow (like a "jet stream") and produced the two "blobs" which we see somewhat further out in the same general directions as the bubbles. These "legs" and blobs are likely to be the places where the fast wind "hits" the surrounding interstellar gas and dust, or possibly material which was earlier lost by the red giant star. The collision results in rapid heating (the socalled ``shock process"), so that the "shocked" regions start to shine in the light of various ionized elements; they are similar to the "Herbig-Haro" objects.

This general scenario was confirmed by spectra which were obtained of the two blobs. The astronomers found that they are moving away from the central object with speeds of the order of 100 kms-1 Their velocities in space must actually be higher, because we only observe them as projected on the line-of-sight. This clearly fits the above explanation very well.

Photometry in the visible and infrared regions of the spectrum with other telescopes (3.6 m, 1 m and 0.9 m Dutch) at La Silla, and using the IRAS database, has enabled the astronomers to determine the overall energy distribution of He2-104. When compared with that of another object which is apparently in the similar evolutionary phase, OH231.8+4.2 (eso8703), it would appear that the temperature of He2-104 is higher, thereby implying a somewhat later evolutionary stage for this object. The surrounding dust would have been heated more. This idea is also supported by the crab-like structure: the bubbles are more expanded and the Herbig-Haro "blobs" are at a larger distance from the central star(s) than in OH231.8+4.2.

It has not yet been possible to make an accurate determination of the distance to the "Southern Crab"; this is mainly because the amount of absorbing, interstellar material along the line-of-sight is not well known. The visual magnitude of the starlike center is about 14.6; it is therefore 3000 times fainter than what can seen with the unaided eye.

The future of the Southern Crab

It therefore looks as if the "Southern Crab" is indeed a binary star which is just about to become a planetary nebula. By good luck, this phenomenon, which in astronomical terms lasts only a very short time and is therefore extremely rare, can here been studied in detail. Changes in the spectrum and brightness may take place in the future, and the object will therefore be kept under regular surveillance during the coming years. The velocities of the various components will also be determined in more detail.

[1] A false-colour, computer enhanced picture is available on request.

The astronomers have written two articles which describe this interesting object; they will appear in the scientific journals Astrophysical Journal and Publications of the Astronomical Society of the Pacific. 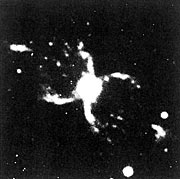 PR Image eso8901a
The "Southern Crab" Nebula (He2-104)
Send us your comments!
Subscribe to receive news from ESO in your language
Accelerated by CDN77
Terms & Conditions