Early this morning, and during superb atmospheric conditions, the 3.5 m ESO New Technology Telescope (NTT) produced its first astronomical images. They completely satisfy the high expectations towards this revolutionary high-tech telescope, the first of its kind in the world. This important milestone was passed less than seven years after the start of the NTT project in 1982 and at the end of a four-year construction phase (various aspects of the New Technology Telescope have been described in eso8801 and eso8805).

Following a three month period of intensive optical, mechanical and electronic tests and adjustments, a CCD camera was mounted at the focal point on one of the instrumental platforms. "First light'' was achieved during the night of March 22 - 23, 1989, when numerous exposures of various astronomical objects were made under very good atmospheric conditions (seeing between 0.36 and 0.50 arcseconds). The pictures were immediately transmitted via a permanent satellite link to the ESO Headquarters in Garching. This Press Release is accompanied by one that shows a field in the well-known southern globular cluster Omega Centauri. The impressive performance is also demonstrated by the profile of a double star in which the components, at an angular distance of only 0.79 arcseconds, are completely separated. On La Silla, Ray Wilson, Head of the ESO optics team responsible for the fine tuning of the NTT optical system, was pleased to announce that: "The NTT performance fully confirms our predictions [1]''.

Thanks to major technological innovations in several areas, the NTT can give sharper images than any other existing ground-based optical telescope. First of all, its active optics system maintains the optimal shape and alignment of the primary and secondary mirrors by means of closed-loop computer control. Secondly, the turbulence of the air around the telescope is minimized by active thermal control; all sources of heat in the dome have been eliminated by water or air cooling and the telescope building itself has been designed in accordance with the results from detailed wind-tunnel experiments. Thirdly, the NTT control system allows a very high pointing and tracking accuracy, ensuring that the images of astronomical objects are not smeared by the telescope motion during exposure; the NTT has already been remotely controlled from the ESO Headquarters via the satellite link.

Its sharper images will enable the NTT to observe fainter and more distant objects and the manager of the NTT project, ESO astronomer Massimo Tarenghi, "looks forward to a rich harvest of scientific discoveries, beyond the horizon of other telescopes now in operation''.

With the moment of NTT "first light'' sucessfully passed, ESO has now two large telescopes at La Silla. The first of these, the ESO 3.6 m telescope which is a typical representative of the classical 4-m class of large optical telescopes, became operational in 1976. The NTT illustrates the great advances that have taken place in astronomical technology in the meantime. Compared with the "old'' 3.6 m, the NTT is capable of giving three times sharper images; its improved aperture ratio (f/2.2) makes it three times "faster''; its main mirror weighs only half as much and the entire telescope is three times lighter than its predecessor.

Last, but not least, the NTT was constructed well within the budget frame set in 1982. Financed by the entrance fees from Italy and Switzerland, who joined ESO that year, the NTT has cost 25 million DM, or only one third of the earlier ESO 3.6 m.

[1] On another night with 0.5 arcsec seeing, the NTT optics were actually measured to concentrate 80% of the light within a diameter of less than 0.26 arcseconds. However, comparison with the laboratory tests proves that, without measuring noise, the real quality of the optics as now working is between 0.15 and 0.20 arcseconds, so that even the best possible seeing conditions can be fully exploited whenever they occur. 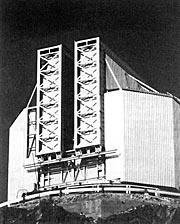 PR Image eso8903c
Very sharp images with the ESO NTT at "first light''
Send us your comments!
Subscribe to receive news from ESO in your language
Accelerated by CDN77
Terms & Conditions