Discovery of the Most Distant "Normal" Galaxy Known

Astronomers working at the ESO La Silla observatory have just discovered the most distant "normal" galaxy known so far. It has been given the designation G 0102 - 190 and its distance is so great that the light we observe from it was emitted when the Universe was only one third as old as now [1].

Why is it so important to observe "normal" galaxies?

Looking back through time towards the depths of the Universe in a way is similar to reading ancient chronicles from our own past: while we hear much about spectacular events like wars and the ascension of kings and emperors, the inconspicuous life of the common man only rarely emerges from the shadows. And so it is when we search for objects in the distant realms of space: there we first of all find the brightest quasars and the most energetic radio-galaxies which, because of their prodigious output of energy, can be detected at immense distances.

However, while these objects are of course highly interesting in themselves, they most certainly only represent a very small fraction of the objects located out there. As is the case in our immediate surroundings, it is believed that the spectacular, energetic objects are greatly outnumbered by much less bright "normal" galaxies, also far out in space. The problem is that at these large distances the light we receive from them is so faint that they can hardly be observed, even with the largest astronomical telescopes.

And yet, it is exactly these galaxies which we must study in order to progress in one of the most central subjects in modern astrophysics: the evolution of the Universe. At the present epoch, virtually all matter in the Universe is concentrated in "normal" galaxies, such as our own Milky Way and its neighbour, the Andromeda galaxy, neither of which - and that is good for us - shows any particularly strong activity. It is therefore of crucial importance to understand how "normal" galaxies have developed and what they were like, a long time ago.

We can do so by observing "normal" galaxies at very large distances, so great that their light has been underway to us during a significant fraction of the age of the Universe. Indeed, unless we are able to observe such very distant objects and compare them with similar nearby galaxies (which we see as they are "now"), it would be impossible to discuss the evolution and formation of galaxies in the early Universe and also the evolution of the Universe itself.

Detection of distant galaxies by means of quasar light

Galaxies which are so distant that they are observed as they were when the age of the Universe was about one third or less of its present age, i.e. galaxies with redshifts [2] above 1, are very difficult to detect directly since the light we receive from them is extremely faint. Moreover, it is not sufficient just to detect such galaxies as faint nebulous spots on an astronomical image; supplementary observations of their spectra are needed to estimate distances and physical properties. Spectral observations are even more difficult and have so far only been possible for the brightest of the very distant objects, i.e. for the very luminous quasars and a small number of bright radio-galaxies.

That very distant "normal" galaxies actually exist has been inferred from the presence of absorption lines in the spectra of extremely distant quasars. When the light from one of these ultraluminous objects on its way to us happens to pass through the interstellar gas in a "normal" galaxy on the same line of sight, part of the light is absorbed at particular wavelengths which is a measure of the redshift and therefore the distance of the intervening galaxy. Absorption features of hydrogen atoms and heavier elements have been detected in various studies, during which quasars are used as background "candles" to probe all the intervening matter between us and them (eso8713).

The first observations at ESO

By means of such observations in 1985 at the 3.6-m telescope at La Silla, Jacqueline Bergeron, astronomer at the Institut d'Astrophysique de Paris (CNRS, France) was able to detect the image of a "normal" galaxy at a redshift z=0.4, i.e. at an epoch corresponding to about two thirds of the age of the Universe (23⋅th). The existence of this galaxy had first been inferred from the presence of absorption lines in the spectrum of a quasar, situated much further away. This first identification was soon followed by about a dozen others at similar redshifts (i.e. distances) during a survey carried out in collaboration with another French astronomer, Patrick Boissé of the Ecole Normale Superieur in Paris.

The French astronomers found that all of these galaxies appear to be single; they are not members of galaxy clusters and are therefore referred to as "field" galaxies. Their spectra and luminosities (i.e. the amount of energy emitted) were typical of nearby ‘normal" galaxies.

The observations showed that these distant galaxies are surrounded by huge gaseous halos, with diameters roughly three times larger than those of the inner regions occupied by the stars. This is demonstrated by the fact that even though the centres of these galaxies are separated from the quasar images by 5 to 10 arcsec, the quasar light still passes through the gaseous halos so that absorption lines are visible in the quasar spectra.

Thus the study showed that most, if not all field galaxies at the earlier epoch that corresponds to redshift z=0.4 (i.e. tg=23⋅tH),have extended gaseous halos. Since galaxies today (t=tH) do not appear to possess such extended gaseous halos (for instance, the Milky Way has no big, spherical halo), this suggests that there has been a strong evolution in more recent times. The observed halos around the distant galaxies are most likely the remnants of the huge gaseous clouds in the early Universe whose collapse led to formation of galaxies.

Now, a "normal" galaxy at redshift 1!

Encouraged by this successful search for "absorbing" galaxies at z=0.4, Jacqueline Bergeron continued this work in collaboration with Stefano Cristiani (Osservatorio di Asiago, near Padova, Italy) and Peter Shaver (ESO), searching for "normal" galaxies at even larger distances, corresponding to redshifts z=1.0 to 1.5.

Observations were conducted in March and September 1990 at the ESO New Technology Telescope and resulted in the identification in late September of the first "absorbing" galaxy at z:1. The galaxy, now designated G 0102-190, has a redshift z = 1.025 ±0.001; this was measured from a strong emission line of ionized oxygen atoms, which was detected in a spectrum of total exposure time of 4.5 hours. The redshift of the absorption in the spectrum of the quasar (UM 669, zQ= 3.035) was measured as zα= 1.026 and, given the accuracy of the redshift determination, zg = zα; this proves beyond any doubt that it is indeed this galaxy that causes the absorption.

As seen in the picture, accompagnying this Press Release, the absorbing galaxy lies 4.8 arcsec south of the quasar. This corresponds to a linear separation between the centre of the galaxy and the line of sight to the quasar of about 160 000 light years, meaning that G 0129-190 must possess a gaseous halo of at least this size.

The difficulty of this spectral observation is illustrated by the fact that the observed brightness of this galaxy is only r = 23.2 mag, i.e. no more than 2% of that of the background emission from the Earth's atmosphere. At the same time this brightness, together with the measured distance, indicates that the galaxy is "normal" in the sense that its luminosity (energy emission) is at the most double that of the Milky Way Galaxy. It is more than thirty times fainter than typical radio-galaxies and one-thousand times fainter than typical quasars, observed earlier in the distant Universe.

A first glimpse of the "common inhabitants" of the early Universe?

This first identification of a "normal" galaxy at redshift z=1 suggests that gaseous halos of galaxies were at least as extended at the corresponding epoch, as later at t=23⋅tH. The present galaxy is also in other respects very similar to those which were earlier found at redshifts near 0.4; in particular it has about the same luminosity.

The initial success gives reason to hope that this observational approach will soon lead to the detection of further, "normal" galaxies at even larger redshifts and earlier epochs. The observational programme now continues and the images of a number of other distant and supposedly "normal" galaxies, seen in almost the same directions as quasars, have already been identified; their spectra will soon be observed. If also they are found to be situated at the distances measured from the absorption lines seen in the quasar spectra, then they will not be intrinsically much brighter either, and it would appear that there has been no substantial change of the luminosity of galaxies during this long interval of time.

Earlier surveys of extremely faint galaxies indicate that either the local density or the luminosity of "normal" galaxies increase with redshift. The present observational programme will undoubtedly contribute to the solution of this central problem in the evolutionary history of the Universe.

[2] In astronomy, the redshift denotes the fraction by which the lines are shifted towards longer wavelengths in the spectrum of a distant galaxy or quasar receding from us with the expansion velocity of the Universe. The observed redshift gives a direct estimate of the apparent recession velocity, which is itself a function (the Hubble relation) of the distance to the object under study. If we denote the age of the Universe as and the time the light we observe from a galaxy was emitted as , then a galaxy redshift of corresponds to a look-back to , i.e. we see the galaxy as it was when the age of the Universe was only one third of what it is now.

The detailed results of this investigation will be reported in a Letter to the Editor in the European journal Astronomy & Astrophysics. 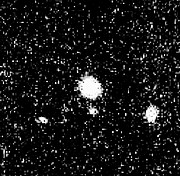