NASA's Hubble Space Telescope (HST) has revealed an unusual and fascinating new optical jet in the nucleus of the elliptical galaxy NGC 3862.

"It appears that we are seeing a new class of phenomenon," says Dr. Philippe Crane of the European Southern Observatory, who discovered the jet in images sent back by the European Space Agency's Faint Object Camera on board HST. "The jet-like feature was totally unexpected in this galaxy. This is typical of the kinds of discoveries that were expected from HST."

The HST observations were made by Crane and the Faint Object Camera Instrument Definition Team of the European Space Agency (ESA).

The shortest jet so far

NGC 3862 is the sixth brightest galaxy in a rich cluster of galaxies known as Abell 1367, located at a distance of about 260 million light-years away in the constellation Leo.

Previous observations of NGC 3862 taken in radio wavelengths have revealed a jet-like structure which extends for a very long distance. NGC 3862 is also a source of X-rays.

"Since the jet is only 0.6 arc seconds long (equivalent to the angle under which a one-kilometre object on the Moon would be seen), it would have been very difficult to detect it from a ground-based observatory," says Crane. "The jet is also prominent in ultraviolet light. Both of these characteristics are especially well exploited by the ESA Faint Object Camera".

NGC 3862 was observed with the FOC in high resolution (f/ 96) mode on 25 January  1992 with two filters. One exposure, taken in yellow-green light, reveals the distribution of the normal old stellar population in this galaxy. The second exposure, taken in the near ultraviolet light, was intended to reveal evidence for a young hot stellar population in the nucleus. To their surprise the researchers found the optical jet.

What is a jet?

Extragalactic jets are not well understood. They appear to transport energy in a confined beam out from the active nucleus of the host galaxy. Presumably super-massive black holes are the powerhouses behind jets.

Extragalactic jets have been detected in radio wavelengths in many active galaxies, but only a few have been seen in optical light. Astronomers do not yet understand why some jets are seen in visible light and others are not. They would also like to understand the connection between radio and optical emissions.

The NGC 3862 jet does not easily fit into the standard model of jets. The new jet is markedly different from the optical jet seen in M87 (a galaxy previously studied in detail by HST and ground-based telescopes2) in several ways. The NGC 3862 jet is about 750 light-years long, compared to a length of 5,000 light-years for the M87 jet. The jet in M87 is brighter at redder wavelengths because it emits reddish synchrotron radiation (so-named because this form of light was seen first in laboratory particle accelerators) produced by high-speed electrons spiraling in the magnetic field which confines the jet. The N GC 3862 jet however is much brighter in ultraviolet light (UV).

"Further observations will be needed to clarify the nature of the emission seen in this jet", says Crane. This new type of jet suggests that astronomers are seeing a new and unexpected phenomenon in galactic nuclei.

[1] This Press Release is published simultaneously by the European Southern Observatory and the Space Telescope Science Institute, Baltimore, Maryland, U.S.A. It is accompanied by a B/ W photo. 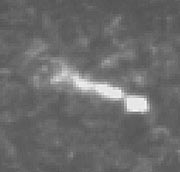 PR Image eso9206a
High-energy jet in NGC 3862
Send us your comments!
Subscribe to receive news from ESO in your language
Accelerated by CDN77
Terms & Conditions