During the first weeks following its discovery on January 31, 1996, Comet C/1996 B2 (Hyakutake) has gradually brightened from magnitude 11-12 to 8. As it moves nearer to the Sun and is headed for a close approach to the Earth in late March 1996, the observers continue to describe it as diffuse, with a central condensation, but no typical comet tails were seen so far.

This is not unusual for a comet at Hyakutake's current distance from the Sun, 1.67 AU (251 million kilometres) on February 21, since the ion tail normally develops at a heliocentric distance of about 1.5 AU (225 million kilometres). The comet will be at that distance on March 2. Nevertheless, this comet being quite active, the appearance of a visible tail might be expected to occur somewhat earlier.

The present photo is the first to show the turn-on of the ion tail (this is the technical term for this event). It is a reproduction of a 15-min CCD exposure obtained by ESO-astronomer Ferdinando Patat on Feb. 16.35 UT with the Danish 1.54-m telescope and the DFOSC multimode instrument (2k x 2k pix CCD) at the ESO La Silla Observatory. An R-filtre was used. The frame was image-processed at the ESO office in Santiago de Chile by another ESO-astronomer, Stefano Benetti, and then transferred to ESO Garching. The field measures 10.4 x 10.4 arcmin; the scale is 0.39 arcsec/pix; North is up and East is to the left.

There is some straylight from two comparatively bright stars near the upper and right borders. An artificial satellite crossed the field during the exposure.

The comet head has the well-known tear-shaped form, seen on earlier exposures. However, it now also shows two broad tails in the anti-sun direction (p.a. = 289 deg; the `position angle (p.a.)' is measured anti-clockwise from North over East) These tails can be followed from about 3 arcmin from the point of maximum light (the innermost region of the coma in which the `dirty-snowball' nucleus is located) and out to a distance of 10 arcmin at the border of the CCD frame.

Both tails are quite faint and are just visible on this long-exposure frame obtained at a medium-size astronomical telescope with advanced equipment. The stronger of the two has comparatively straight, sharp edges in the sector between p.a. = 296 and 286 deg. There are clear signs of internal structure; in particular on the false-colour version of the photo, wavy (actually, helix-shaped) `threads' are visible. This indicates the presence of ions which are being accelerated by the action of the interplanetary magnetic field, carried by the solar wind particles.

Normally, a cometary ion tail is best visible on blue-sensitive exposures, but it may also show up on red exposures like this one. The emission recorded here most likely originates in CO+ and/or H2O+ ions which emit in the corresponding spectral interval (6000 - 7000 A).

The other tail points almost due West. It is broader, with rather diffuse structure and undefined edges and is most probably a dust tail.

Following this first detection of tails at Comet Hyakutake, it is now expected that their brightness and length will increase, so that they soon become observable with smaller telescopes. The relatively early onset of tail activity also gives good hope for the comet's future performance.

Information about the present observation was published on IAU Circular 6318 (February 21, 1996). 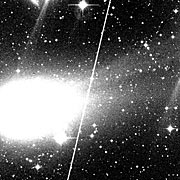 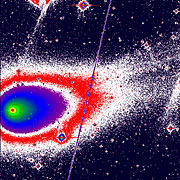