During the continuing "Commissioning Phase" of the first VLT 8.2-m telescope (UT1), it has been possible to carry out some astronomical observations from time to time. Thanks to its large light-gathering capacity and excellent optical quality, the UT1 is particularly well suited to image very faint and distant objects. To assess this important potential for front-line research in more quantitative terms, it was therefore decided to perform some preliminary tests in this direction, already at this early moment.

The ESO team chose to obtain images of a part of the Hubble Deep Field - South (HDF-S), so designated because it will be the target of a dedicated observing campaign by the Hubble Space Telescope (HST) and many ground-based telescopes in September 1998. It is an area in the southern constellation Tucana in which only faint objects are seen. This is a natural choice for the VLT's first look into deep space, since it gives the possibility of judging the actual performance of the VLT UT1 by comparison with existing deep exposures obtained with other ground- and space-based telescopes. In addition, the new VLT exposures will be of particular scientific value by providing an important contribution to the ongoing cosmological studies of distant objects in this sky area.

This photo is a reproduction of a combination of five 15-minute exposures with the VLT Test Camera. They were obtained through a red filtre on June 5, 1998, during a spare period when no technical tests were scheduled. They cover a part of the Hubble Deep Field - South (about 1.3 x 1.3 arcmin, or about 1/400th of the area of the Full Moon). It is the VLT's first real look into deep space and represents a most promising demonstration of the VLT's future possibilities.

Even though the combined exposure time was only 75 minutes, the photo shows a large number of extremely faint and distant galaxies. In fact, some of those seen here are as faint as magnitude 27.5, or more than 400 million times fainter than what can be seen with the unaided eye. The image quality is excellent (0.37 arcseconds); this is reflected in the fact that some of the brighter galaxies show delicate structures.

This present image marks the first small step into what will later become one of the VLT's main scientific domains. It is the intention to repeat such exposures whenever time permits and thus to collect gradually a substantial number of frames of this sky field. As their numbers increase and by combining them carefully, the corresponding view of the VLT into space will become progressively deeper and also reach earlier and earlier epochs. 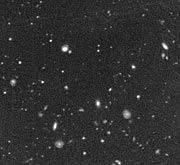