Portrait of a Nearby Spiral Galaxy

The portrait of NGC 4945 above adorns the centrefold of the most recent issue of the ESO Messenger (no. 95; March 1999). It provides another impressive demonstration of the observational capabilities of the new WFI Camera at the MPG/ESO 2.2-m telescope at La Silla.

The portrait of NGC 4945 above adorns the centrefold of the most recent issue of the ESO Messenger (no. 95; March 1999). It provides another impressive demonstration of the observational capabilities of the new WFI Camera at the MPG/ESO 2.2-m telescope at La Silla.

NGC 4945 is a relatively nearby spiral galaxy, not too different from the Milky Way Galaxy in which we live. However, since it happens to be seen almost edge-on (under an angle of about 10°), the spiral structure is hardly discernible. This particular perspective is essentially the same as the inside-view we have of the Milky Way, because our Solar System is located near its central plane. The distance from the Sun to the centre is about 30,000 light-years, or 2/3 of the radius of the Milky Way galaxy.

In both galaxies, the interstellar gas (that emits its own light and also reflects the stellar light) and dust (that absorbs the stellar light), imprint a high-contrast structure on the much smoother distribution of their hundreds of billions of stars. Most of the light recorded in the photo of NGC 4945 is from stars, while the dark lanes are areas where the dust blocks the light. The patchy and filamentary appearance of the interstellar matter indicates that it is a very dynamical medium.

In those regions, where the density is sufficiently large, self-gravitation causes clouds of dust and gas to contract to the point where new stars will begin to form. This process takes hundreds of thousands to millions of years. In galaxies like these, the equivalent of about one solar mass is transformed into new stars every year.

In NGC 4945 , observations at X-ray and infrared wavelengths have found evidence of very energetic processes in the nucleus (which is of the so-called Seyfert 2 type and may harbour a black hole ) and a major burst of star formation takes place in its vicinity.

NGC 4945 belongs to the Centaurus group of galaxies, seen in the constellation of that name and located at a distance of approximately 13 million light-years. This is only six times the distance to the 6th magnitude Andromeda Galaxy , the large galaxy in the northern sky that is visible to the unaided eye and is the most prominent member of the Local Group of Galaxies. NGC 4945 (9th magnitude; i.e. 15 times fainter) is thus a rather nearby object. Its velocity with respect to the Milky Way is comparatively small, 560 km/sec, and is not governed by the expansion of the Universe but reflects the local motions of the two galaxies. 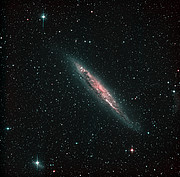 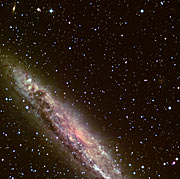 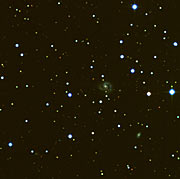 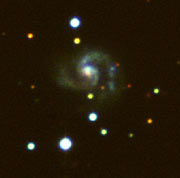 PR Image eso9922d
Detail of field near spiral galaxy NGC 4945
Send us your comments!
Subscribe to receive news from ESO in your language
Accelerated by CDN77
Terms & Conditions