Due to previously unforeseen new requirements on the extended lifetime of NACO until 2018, imposed by the delay of the ERIS project, it was decided to limit the number of relocations of NACO between VLT focal stations to a single one. A careful evaluation of the scientific and technical advantages and disadvantages was discussed by the Scientific Technical Committee in a special teleconference. NACO will not be mounted on UT4 in place of HAWK-I in Period 93 as announced in the Call for Proposals but will replace CRIRES on UT1 as of September 2014. CRIRES will already be dismounted by July 2014 and handed over to the CRIRES+ upgrade project. These constraints have been used to schedule UT1 and UT4 for Period 93. 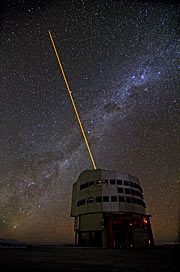 PR Image dave-jones-7
Yepun and the Laser Guide Star
Send us your comments!
Subscribe to receive news from ESO in your language
Accelerated by CDN77
Terms & Conditions