Active Galactic Nuclei (AGN) are being discovered in ever-larger numbers over the whole electromagnetic spectrum. Different bands employ different methods to identify these sources but, most importantly, provide different windows on AGN physics. The infrared band is mostly sensitive to obscuring material and dust, the optical/UV band is related to emission from the accretion disk, while the X-ray band traces the emission of a (putative) corona. γ-ray and (high flux density) radio samples, on the other hand, preferentially select AGN emitting strong non-thermal radiation. This has led to a proliferation of classes, which outsiders (but insiders as well!) find mesmerising. The main goal of the Workshop is to paint the AGN “big picture”, which comes out of these multi-wavelength surveys, and understand the truly intrinsic and fundamental properties of AGN and the physics behind them. This will be done by discussing primarily these topics:

1. the different types of AGN selected in the various bands

2. the similarities/differences they display

3. the impact of selection effects on the interpretation of the results

4. the physical mechanism(s) behind emission in a given band

5. the effective range of black hole mass and Eddington ratio probed by a given selection method

6. the possible limitations of current observations and/or facilities

All of the above will be achieved by having a truly multi-wavelength Workshop consisting of review and contributed talks distributed over six sessions: radio, infrared, optical, X-ray, γ-ray, and variability.

The workshop will take place at the ESO Headquarters in Garching (Germany) from June 27 to July 1, 2016. 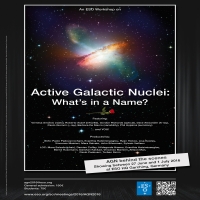