Behind the scenes at ESO: Showing you the road to the stars
What you’ll discover in this blog post:
In this week’s blog post, ESO Director General Xavier Barcons discusses the close relationship that ESO enjoys with our fellow intergovernmental organisation dealing with space, the European Space Agency. Xavier talks about just a few of the activities that ESO and ESA work on together, and explains how sharing our knowledge and expertise strengthens Europe’s position in our knowledge of the cosmos.

Greetings to all and welcome back to the ESO blog!

In my previous blog posts I’ve talked about the work we do internally here at ESO, but in this post I want to take the opportunity to look outward, specifically towards our fruitful and exciting relationship with the European Space Agency (ESA).

Since ESO was set up in 1962, it has carried out an ambitious programme focused on the design, construction and operation of powerful ground-based observing facilities that enable important scientific discoveries. Whilst we have been focused on ground-based scientific observations of the Universe here at ESO, ESA has been developing a number of space-related programmes, with space science being one of its many exciting objectives.

ESA’s impressive fleet of astronomical spacecraft, many of which share similar scientific aims and technology to ESO’s telescopes.
Credit: ESA

ESO and ESA share a number of goals and ambitions, but it wasn’t until 2015 that we signed a formal cooperation agreement to foster future collaborations on themes of common interest. This agreement provides a framework for a closer collaboration and exchange of information in several areas, including scientific research and technology. Ever since, we have been building our relationship and extending our collaborations more and more each year.

By working collaboratively we ensure that our Member States (many of which we have in common) are benefitting from the most productive science and the most advanced technologies possible. Our cooperation agreement promotes the coordination of both organisations’ long-term plans, and allows us to work together on specific programmes and share best practices. 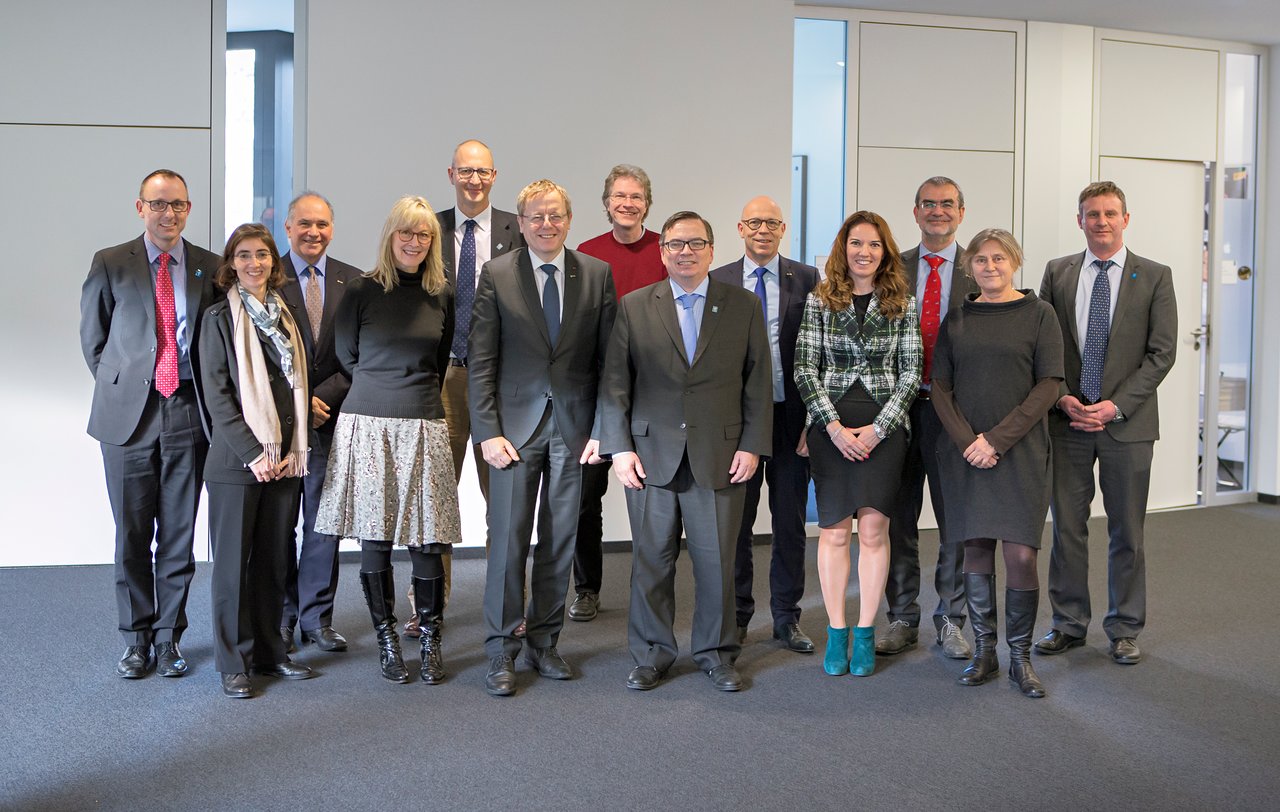 Representatives from ESO and ESA at the last coordination meeting, held at ESO Headquarters in Germany last January.
Credit: ESO 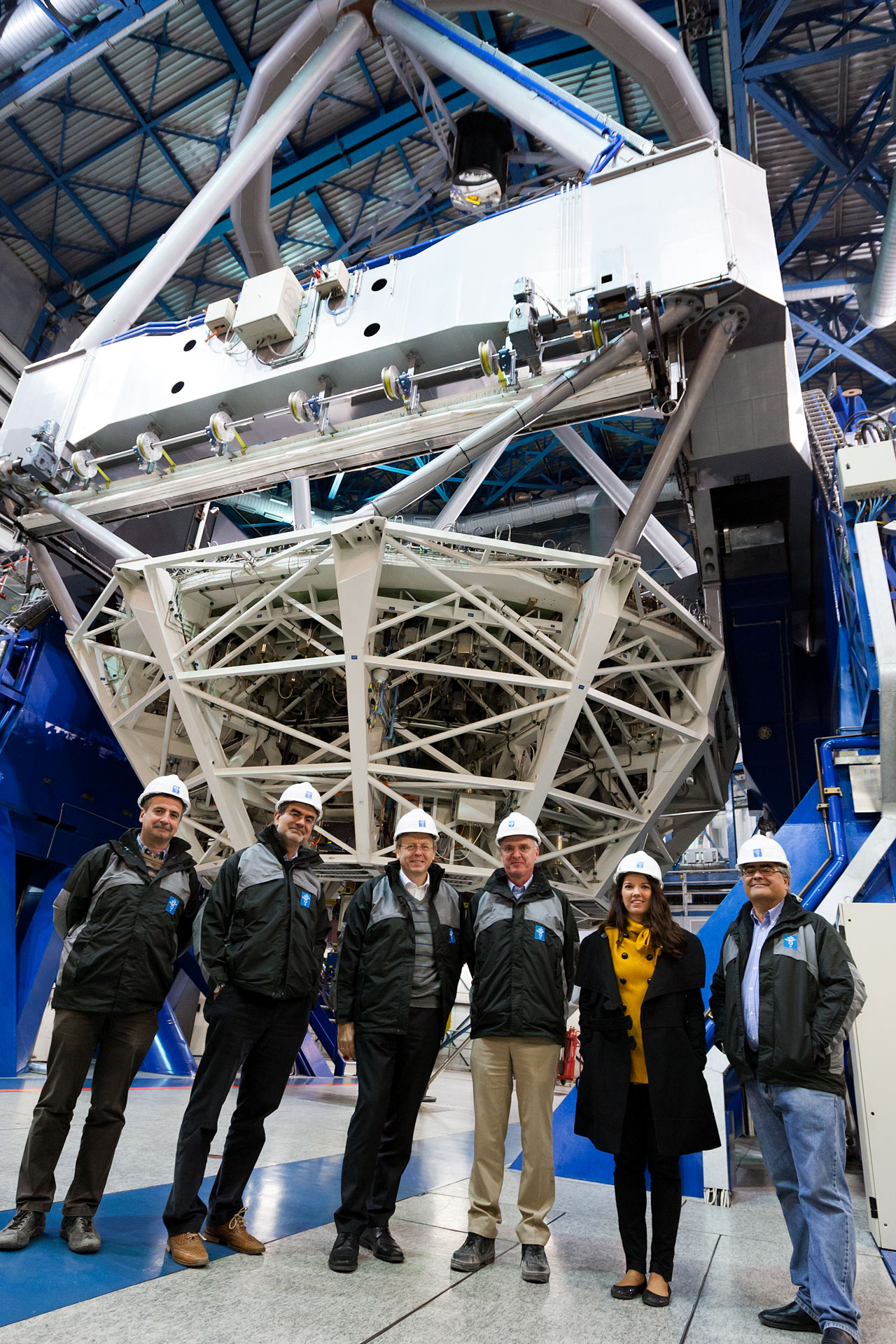 As part of our cooperation agreement, we have created three working groups consisting of members from both ESO and ESA: one in science, one in technology, and one in communications. Every year, these groups come together and their leads report to a meeting with myself and Johann-Dietrich Wörner, the Director General of ESA. During these meetings, we all enjoy hearing about the inspiring projects that the respective working groups collaborate on, and we keep pushing our teams to strengthen the existing joint ventures.

ESO and ESA generate a significant fraction of science data from ground and space for the European astronomical community (and beyond!). The ESA/ESO science working group fosters collaboration between the organisations, to ensure that both organisations’ resources are used efficiently, and to explore synergies of science operations for ground and space missions. There are a number of ways in which these aims are achieved successfully.

Gaia is an ambitious ESA mission that is creating a three-dimensional map of the Milky Way, pinpointing the positions of stars with extraordinary precision; its eagerly-awaited second data set has just been released. ESA and ESO work together closely on the Gaia-ESO public spectroscopic survey, which aims to provide an overview of the motions and chemical compositions of stars in the Milky Way. The results of this survey will revolutionise our knowledge of galactic and stellar evolution. Data obtained using ESO’s Very Large Telescope (VLT) will be combined with data from Gaia to provide a legacy dataset that adds enormous value to the Gaia mission and ongoing ESO imaging surveys. The Gaia satellite is also observed regularly by ESO’s VLT Survey Telescope (VST), in order to measure its location extremely precisely, resulting in an improvement of the astrometric accuracy of the Gaia star catalogue. 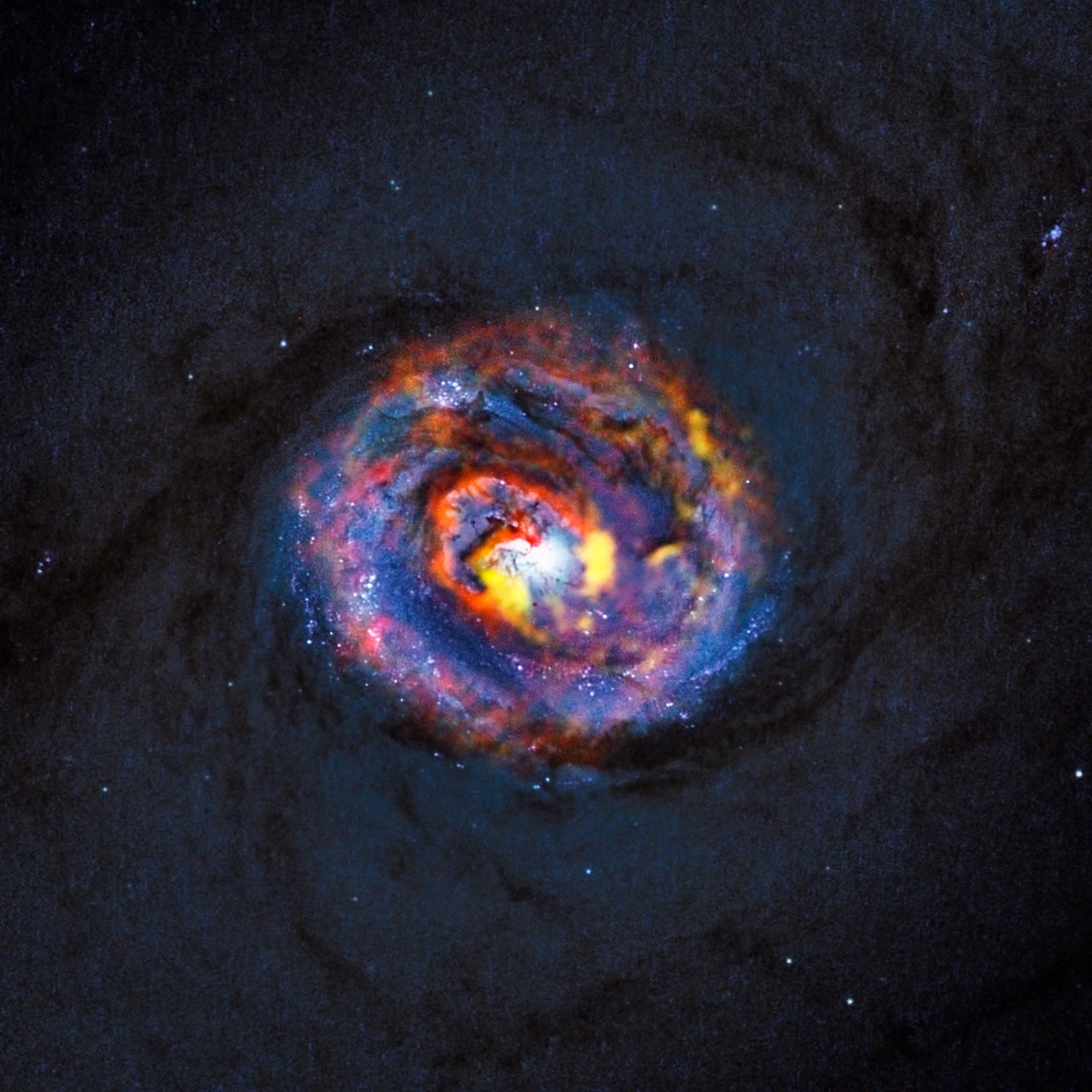 This detailed view shows the central parts of the nearby active galaxy NGC 1433. The dim blue background image, showing the central dust lanes of this galaxy, comes from the NASA/ESA Hubble Space Telescope. The coloured structures near the centre are from recent ALMA observations that have revealed a spiral shape, as well as an unexpected outflow, for the first time.
Credit: ALMA (ESO/NAOJ/NRAO)/NASA/ESA/F. Combes

ESO also makes ground-based follow-up observations of ESA discoveries. As part of the cooperation agreement, ESO contributes to the International Asteroid Warning Network (IAWN), which aims to detect, track, and physically characterise Near-Earth Objects (NEOs) to determine whether any are potentially dangerous to Earth. The network is made up of scientific institutions, observatories, and a variety of interested groups, all of which can make observations of asteroids and NEOs. As part of this contribution, ESO offers VLT observing time to perform critical observations of NEOs that cannot be performed using either ESA telescopes or other small telescopes. These observations constrain the orbits of faint NEOs newly discovered by ESA, which would be lost without immediate follow-up. The observations also characterise and refine the orbits of faint, known NEOs on threatening orbits. As of July 2017, ESO had made 80 observations of 61 objects. Of these, 21 were removed from the "risk list", and 20 more have had their risk downgraded. In 6 cases, the improved understanding of their orbit resulted in an increase of their risk.

The ESA/ESO science working group is driving several new collaborative ventures, including joint annual ESA/ESO workshops and a joint ESA/ESO Fellowship programme. The latter will see the recruitment of a talented postdoctoral researcher to work on a synergetic project — for example, ESA’s PLATO mission. PLATO is an ESA satellite which will look for exoplanets via the shadows cast by their transits across the face of their star, but which will rely on ground-based telescopes for radial velocity measurements to tie down orbital parameters and exoplanet masses. The Fellow would link ESA and ESO, travelling between the two to share knowledge and experience.

With the aim of taking full advantage of complementary ground-based and space-borne observing facilities, ESO and ESA jointly support scientific programmes that require observations with both the ESO VLT(I) telescopes and the XMM-Newton X-ray observatory. ESO may award up to 80 hours of XMM-Newton observing time and the XMM-Newton project may award up to 80 hours of ESO VLT(I) observing time to proposals wishing to use both facilities. This collaboration has so far lasted over a decade.

Delegates of the Science Operations 2015 (SciOps2015) ESO/ESA Workshop pose for a photo on the bridge connecting buildings at ESO’s Headquarters in Garching, Germany.
Credit: ESO

But we don’t only share scientific aims. A ground-based telescope in the Atacama Desert has a lot in common with a space-based satellite orbiting the Earth, so both ESO and ESA share a lot of the same technology, including optics, electronics, mechanics, materials. We also use similar software and have similar systems overall. Sharing documentation, research results, knowledge and experience is a highly productive way to work.

ESO has a lot of expertise in laser guide stars and adaptive optics technology. We not only share that expertise with ESA, but we also work with them to develop that expertise even further. Furthermore, we collaborate on the development of ever smoother, bigger, and better mirrors, which are of course used on both ESO and ESA telescopes. We share and develop software together too, including image analysis and production tools. Recently we have begun to collaborate on the development of curved CCD detectors to use for wide and curved focal planes.

Both ESO and ESA host a wealth of state-of-the-art research facilities, and we take advantage of our close relationship not only to use each other’s facilities, but also to share results and conclusions from our own facilities.

We will continue to keep the communication channel open with regards to technology research and development, in order to potentially identify further collaboration initiatives.

ESO’s ground-based telescopes use much of the same technology as ESA’s space-based telescopes. Shown in these images are the Extremely Large Telescope (ELT) and the James Webb Space Telescope (JWST), both of which have mirrors consisting of many hexagonal segments.
Credit: ESO/L. Calçada/ACe Consortium, ESA (C. Carreau)

Both ESO and ESA pride themselves on their public outreach activities, and work together to successfully communicate astronomy, space science and space technology.

This year, ESA and ESO plan to hold an internal communication workshop that will cover topics such as audiovisuals, social media, news activities, and exhibition activities. We hope to continue to organise these collaborative workshops in the future in order to share experience. Often, scientific discoveries involve both ESA and ESO; as part of our cooperation agreement, we pay special attention to mentioning each other where possible in the news releases announcing these discoveries, and use such news to develop our relationship further.

We have worked together on a variety of educational materials, including the ESA/ESO exercises which give students a taste of what it’s like to be an astronomer. We also both worked with the European Organization for Nuclear Research (CERN) on a project called Physics on Stage, which selected new ideas for presentations and educational materials and showcased them at the Physics on Stage Festival. 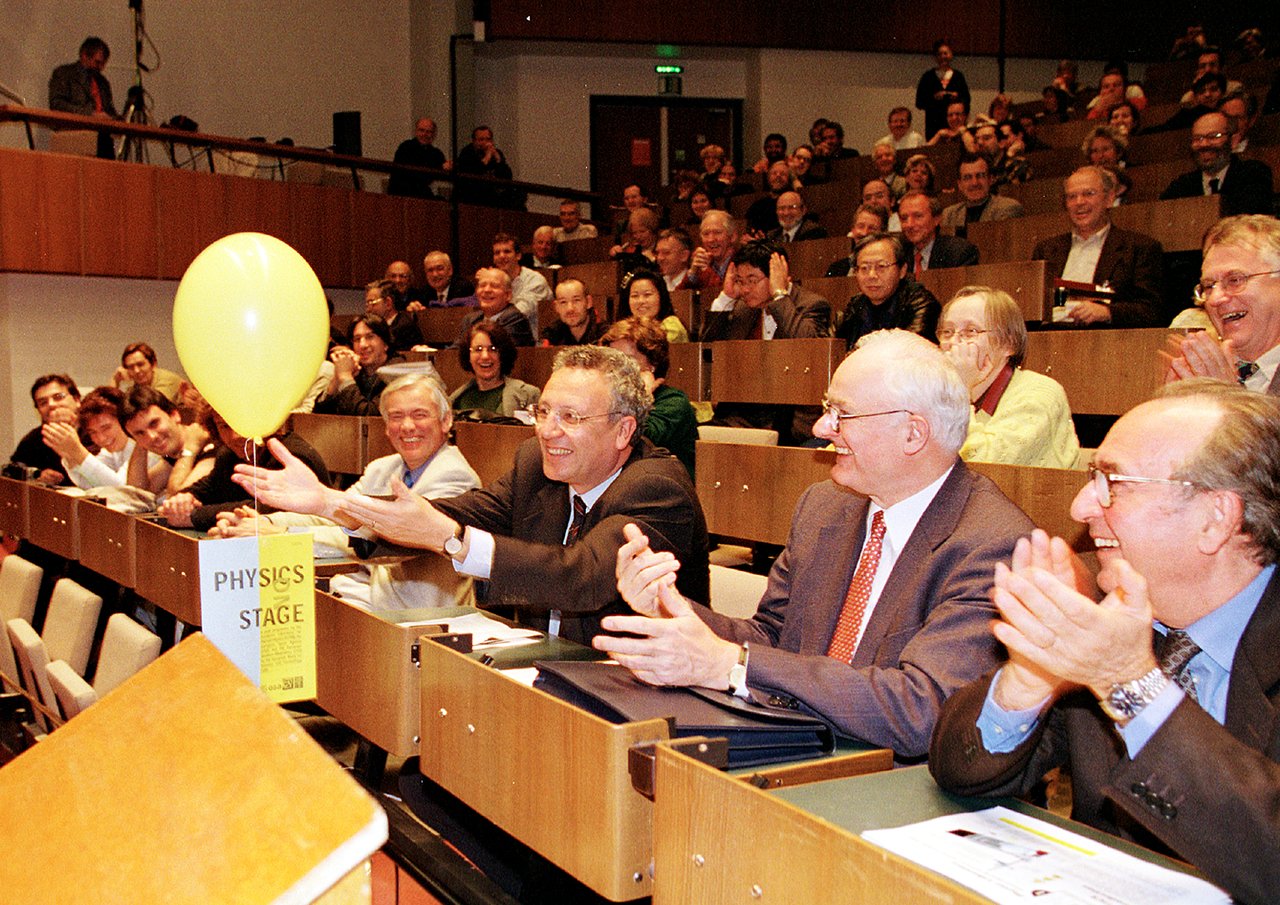 In the future, we would like to explore the production of a shared manifesto, aiming for a series of principles and values, and a common vision for science communication in Europe. Such a manifesto would help align communication efforts and position Europe at an intercontinental level.

Here at ESO, we are extremely proud of our relationship with ESA, but we are also proud to be part of a larger group of scientific organisations — the EIROforum. The EIROforum brings together eight of the largest European research organisations with the aim of sharing the expertise of each member organisation to help European science to reach its full potential. 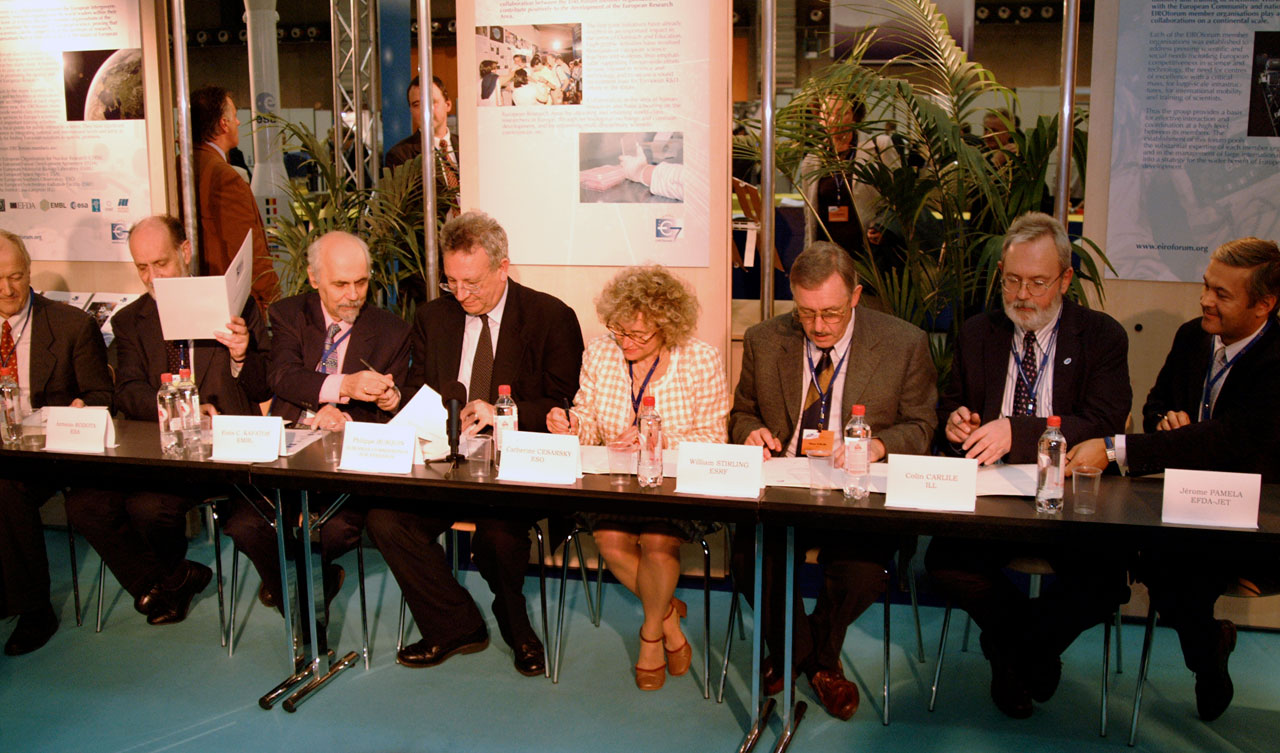 The signing of the EIROforum Charter on 4 November 2002, with representatives from CERN, ESA, EMBL, ESO, ESRF, ILL and JET-EFDA.
Credit: ESO/H. Heyer

The projects I have mentioned in this blog post form only part of the areas that ESA and ESO work together on. Having served in a number of ESA science committees and science missions myself, these collaborations are all very close to my heart. We hope that these close relationships continue to grow for many years to come.