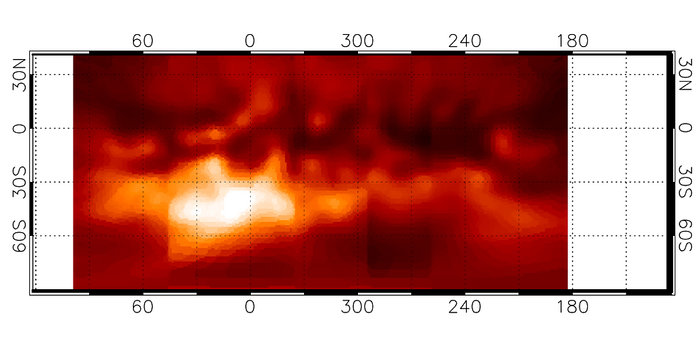 Map of Titan's surface features. It was obtained through a "transparent", narrow spectral window with the 8.2-m VLT YEPUN telescope and the NACO adaptive optics instrument operated in the Simultaneous Differential Imager (SDI) mode. It covers about three-quarters of the full surface and has an image resolution (sharpness) of 0.06 arcsec, corresponding to 360 km on the surface. One degree of longitude on the equator corresponds to 45 km on Titan's surface. The brightness is proportional to the surface reflectivity. The nature of the various regions is still unknown although it is speculated that the darkest areas may indicate the extent of reservoirs of liquid hydrocarbons.