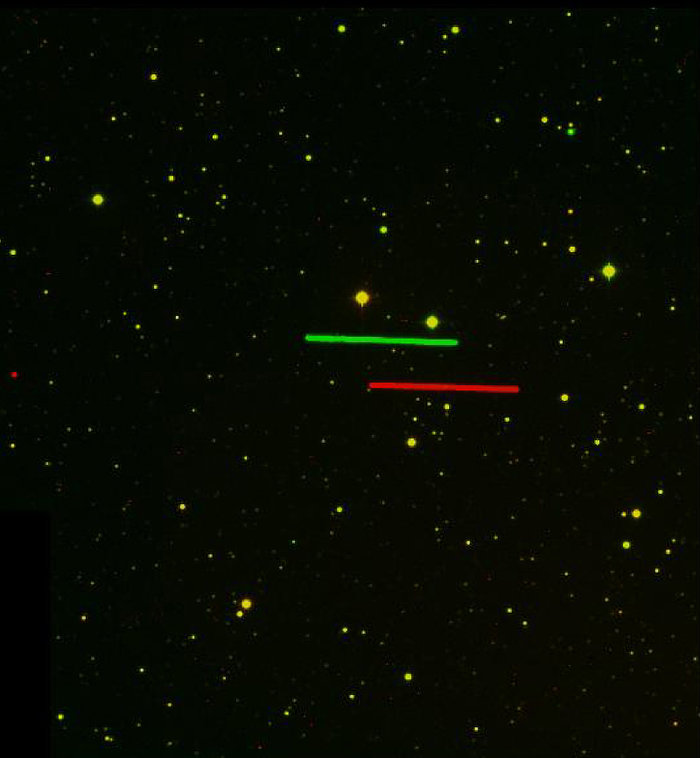 Composite, false-colour image showing asteroid (4179) Toutatis moving in front of background stars, as seen from Paranal (red trail) and La Silla (green trail). The two photos used for this combination were obtained nearly simultaneously in the morning of September 29, at 02:30 hrs UT, when the asteroid was passing through the constellation of Triangulum Australe ("The Southern Triangle"). The offset between the two trails corresponds to the difference of the lines-of-sight from the two telescopes towards the object. Two 1-min images were taken almost simultaneously with the FORS-1 instrument on Kueyen, the second 8.2m VLT Unit Telescope on Paranal, and on the WFI camera installed on the ESO/MPI 2.2m telescope at La Silla. The WFI image was obtained though a R broad-band filter; on the VLT, a narrow band [O III] interference filter was used to attenuate the light of the bright asteroid. The images were then scaled and processed in order to compensate for the different characteristics of the two instruments (scale, orientation, distortion, sensitivity). The VLT image is displayed in red, the WFI image in green. As the stars are common to both images, they appear yellowish.