Unique Photos from La Silla and Paranal Measure the Distance

Today, September 29, 2004, is undisputedly the Day of Toutatis, the famous "doomsday" asteroid. Not since the year 1353 did this impressive "space rock" pass so close by the Earth as it does today. Visible as a fast-moving faint point of light in the southern skies, it approaches the Earth to within 1,550,000 km, or just four times the distance of the Moon.

Closely watched by astronomers since its discovery in January 1989, this asteroid has been found to move in an orbit that brings it close to the Earth at regular intervals, about once every four years. This happened in 1992, 1996, 2000 and now again in 2004.

Radar observations during these passages have shown that Toutatis has an elongated shape, measuring about 4.6 x 2.4 x 1.9 km. It tumbles slowly through space, with a rotation period of 5.4 days.

The above images of Toutatis were taken with the ESO Very Large Telescope (during a technical test) in the evening of September 28. They were obtained just over 12 hours before the closest approach that happens today at about 15:40 hrs Central European Summer Time (CEST), or 13:40 hrs Universal Time (UT). At the time of these observations, Toutatis was about 1,640,000 km from the Earth, moving with a speed of about 11 km/sec relative to our planet.

They show the asteroid as a fast-moving object of magnitude 10, about 40 times fainter than what can be perceived with the unaided, dark-adapted eye. They also prove that Toutatis is right on track, following exactly the predicted trajectory in space and passing the Earth at a safe distance, as foreseen.

Detailed calculations, taking into account all available observations of this celestial body, have shown that although Toutatis passes regularly near the Earth, today's passage is the closest one for quite some time, at least until the year 2562. The ESO observations, obtained at a moment when Toutatis was very close to the Earth, will help to further refine the orbital calculations.

Interestingly, the measured angular distance in the sky of the beginnings (or the ends) of the two trails (about 40 arcsec), together with the known distance between the two observatories and the position of Toutatis in the sky at the moment of the exposures fully define the triangle "Paranal-Toutatis-La Silla" and thus allow to calculate the exact distance to the asteroid.

It is found to be very close to that predicted from the asteroid's position in its orbit and that of the Earth at the moment of this unique observation, 1,607,900 km. This exceptional, simultaneous set of observations thus provides an independent measurement of Toutatis' distance in space and, like the measured positions, a confirmation of its computed orbit.

More information about Toutatis is available at the dedicated webpage by the French discoverers and also at the specialised Near-Earth Objects - Dynamic Site. 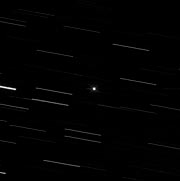 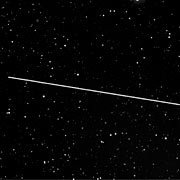 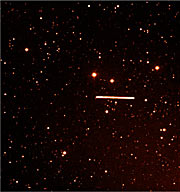 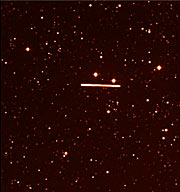 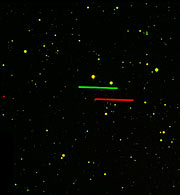 PR Image eso0430e
Asteroid (4179) Toutatis passes the Earth
Send us your comments!
Subscribe to receive news from ESO in your language
Accelerated by CDN77
Terms & Conditions