Mysterious GEMINGA on the move 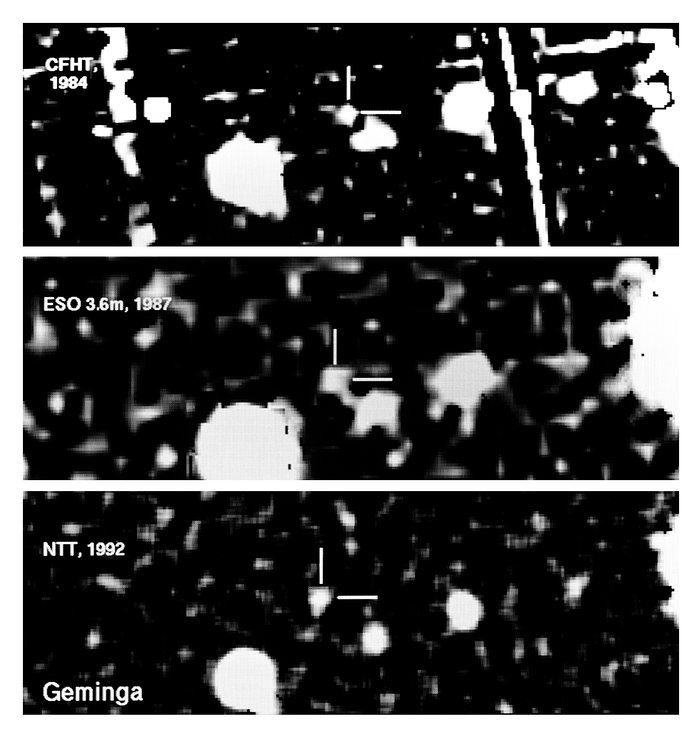 These photos illustrate the motion of the strange object GEMINGA, now believed to be the nearest known neutron star. The fact that GEMINGA is moving was discovered in early November 1992 on the basis of these photos by Italian astronomers Giovanni F. Bignami, Patrizia A. Caraveo and Sandro Mereghetti, all of the Istituto per Ricerce in Fisici Cosmica e Technologie Relative, Milan. The rate of motion indicates a distance of about 300 light-years (100 parsec).

The star-like image of GEMINGAs optical counterpart, known as G'' and with a magnitude of 25.5, is indicated in all three photos which show the same sky field, as recorded by CCD  cameras at different telescopes in different years. The upper photo was obtained by French astronomer Laurent Vigroux at the Canada-France-Hawaii telescope at Mauna Kea on January 7, 1984; it is a composite of 12 individual exposures of 15 min each under good seeing conditions (0.9 arcsecond). At that time the CCDs were considerably more noisy than now, and there are some image faults in this image, for instance the near-vertical straight lines.  The middle photo was obtained on January 29, 1987 by Bignami, Caraveo and Mereghetti with the ESO 3.6-m telescope at La Silla during mediocre conditions (seeing 1.6 arcsecond); it consists of 8 superposed exposures of 15 min each. The lower photo was made with the ESO 3.5-m New Technology Telescope by ESO astronomer Alain Smette on November 5, 1992; 10 exposures of 15 min each were combined; the seeing was very good (0.7 arcsecond). The ESO images were made at low altitude, due to GEMINGAs northern position, 18° north of the celestial equator.

The measured motion of G'' between 1984 and 1992 is 1.5 arcsecond, corresponding to about 0.2 arcsecond/year. The direction of the motion is towards North-East (upper left corner). The width of the photos is about 30 arcseconds.