Mysterious GEMINGA on the Move

Based on observations just obtained with the ESO New Technology Telescope at La Silla, a group of Italian astronomers [1] have securely identified the optical emission from the mysterious GEMINGA object. Although GEMINGA is the second strongest source of energetic gamma-rays in the sky, its optical image is extremely faint and the real nature of this strange object has long been a subject of debate. The present break-through became possible when the astronomers discovered and accurately measured the object's motion in the sky. As a consequence, GEMINGA is now believed to be the closest neutron star known to us, at a distance of no more than 300 light-years, possibly even smaller.

GEMINGA was first detected as a strong gamma-ray source in 1972, by means of instruments onboard the SAS-2 and COS-B satellites. The name comes from "the GAmma-ray source in the constellation GEMINi" and also means "It is not there" in Milanese dialect. The gamma-ray instruments recorded this energetic radiation from a relatively large sky area at once and GEMINGAs position in the sky could therefore not be very accurately determined. For this reason, it was also completely out of question to identify the optical image of GEMINGA; it could be anywhere in a wide Milky Way field. Thousands of Milky Way stars were seen within the very large "error-circle", that is the sky area that corresponds to the uncertainty of the position of the gamma-ray source. GEMlNGA consequently hid itself perfectly among all these stars for almost a decade and the astronomers could only make vague guesses about its true nature.

However, in 1983, Giovanni Bignami and his collaborators in Milan identified GEMINGA with a weak X-ray source which was observed with the Einstein X-ray satellite. Since the X-ray position was much more accurate than the gamma-ray position, it now became possible to narrow down the search area to a much smaller sky field measuring only about 10 arcseconds across. Long exposures with very sensitive optical CCD cameras were made of this sky area by French astronomer Laurent Vigroux in January 1984 with the Canada-France-Hawaii 3.5-metre telescope at Mauna Kea, and also in February 1986 by American as¬tronomers Jules Halpern and David Tytler with the Palomar 5-metre telescope in California. These pictures showed the presence of several, very faint stellar images within the field.

One of these had a bluer colour than any other stars in the field. Its brightness corresponded to magnitude 25.5, that is almost 100 million times fainter than what can be perceived with the unaided eye or a few times the intensity of candle at the distance of the Moon. This "star" was given the provisional designation G" (two other stars in the field were called G and G'). Due to the positional coincidence between the X-ray and the optical positions, as well as the colour, many astronomers were convinced that G" is the optical image of GEMINGA, but final proof was still lacking.

Following this, it became immediately clear that GEMINGA must be a very strange object, since it emits almost all of its energy in the form of very energetic gamma-rays and very little at other wavelengths. It was thought that it could possibly be a neutron star, an extremely compact body, weighing as much as the Sun, but with a diameter of about 20 kilometres only. Some neutron stars have been observed as pulsars, which emit very strong and regular pulses in the radio band, some of them many times every second. This is explained as a "lighthouse" effect during which a beam of energetic particles emanates from near the surface of the rapidly rotating pulsar. The beam regularly "sweeps" the Earth, allowing to observe the strong radio emission associated with this beam each time. Pulsars are believed to be formed during violent supernova explosions. One of the most famous pulsars is the one in the Crab Nebula; it is the remnant of a supernova that exploded in the year 1054.

Earlier this year, weak intensity variations (pulsations) were indeed found to be present in the gamma-and X-ray radiation received from GEMINGA. The measurements showed that at least in this respect G EMIN G A behaved like a pulsar. The derived period was 0.237 seconds, indicating that GEMINGA turns around its axis just over 4 times per second.

But no radio emission has ever been observed from GEMINGA, even with the most sensitive radio telescopes. There is also no nebula around GEMINGA, as there is around the pulsars in the Crab and Vela Nebulae. Does this mean that GEMINGA is perhaps after all a completely different object?

Measuring the distance to GEMINGA

The crucial observation needed to solve this question was now the measurement of the distance to GEMINGA. If GEMINGA is indeed a gamma-and X-ray emitting, rotating neutron star, it must be quite near.

The closer an object is to us, the faster is its perceived motion. This is a well-known phenomenon which can be observed from a moving train. Looking through the window we see the telegraph poles along the railtrack flying by while more distant houses pass more slowly and the mountains in the far background hardly seem to move at all. The same is true in space; the closer an object, the faster it will appear to move, relative to distant stars in the background.

On November 5, 1992, observations of the GEMINGA field were made with the New Technology Telescope (NTT) at the La Silla observatory by ESO astronomer Alain Smette. With the SUSI instrument he obtained 10 exposures, each lasting 15 minutes during very good observing conditions. These images were then combined in the NTT image processing computer by another ESO astronomer, Andrea Moneti, and immediately transfered by satellite data link to Milan. Here, the Italian astronomers compared the new NTT image with the earlier one from the Canada-France-Hawaii telescope in January 1984 and also with a more recent one obtained with the ESO 3.6 metre telescope in January 1987.

It was immediately obvious to the astronomers that GEMINGA (G") is moving, relative to the other stars in the field. This motion is also easily seen on the composite photo that accompanies this Press Release. The direction of motion is towards the North-East and the distance covered between January 1984 and November 1992 is about 1.5 arcseconds. In other words, GEMINGA moves with the unusually high speed of about 0.2 arcseconds per year. This means that on the sky it will cover a distance equal to the apparent diameter of the Moon (30 arcminutes) in just over 10,000 years. This may seem rather slow by earthly standards, but very few stars move so fast, and this is a certain indication that GEMINGA must be a nearby object.

Assuming that the actual velocity of GEMINGA in the plane of the sky is equal to the mean velocity of other pulsars as measured by radio telescopes, that is about 100 km/sec, the distance to GEMINGA can be estimated as about 300 light-years, or about 70 times more distant than the nearest star known, Proxima Centauri. This is a very small fraction of the diameter of the Milky Way galaxy which is more than 100,000 light-years.

At this estimated distance, the gamma-ray radiation emitted by GEMINGA is about what would be expected from a normal neutron star. No other neutron star is known to be that close to us and GEMINGA is therefore the nearest of its type. The reason that no radio-emission is recorded may either be that its beam does not point in the direction of the Earth, or perhaps that it is a comparatively old and weak pulsar, possibly both.

More work to be done

More observations, including some with the Hubble Space Telescope, are now being made to further elucidate the properties of GEMINGA. However, because of its very faint optical image, it will not be easy to obtain a detailed spectrum which may tell us more about its chemical composition etc. This may have to wait until the first 8.2-metre ESO Very Large Telescope unit telescope is ready, supposedly less than four years from now.

GEMINGA is now moving towards the border between the constellations of Gemini and the Lynx, some 20° away from its present position in the sky. At the current speed it will cross that border in about half a million years. So until then, at least, the present name will be alright.

[1] This group includes Giovanni F. Bignami , Patrizia A. Caraveo and Sandro Mereghetti, all of the Istituto per Ricerce in Fisici Cosmica e Technologie Relative, Milan, Italy.

The Italian astronomers have announced the new results in Circular 5651 of the International Astronomical Union, dated 12 November 1992. 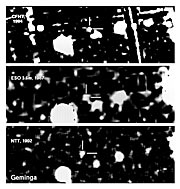 PR Image eso9215a
Mysterious GEMINGA on the move
Send us your comments!
Subscribe to receive news from ESO in your language
Accelerated by CDN77
Terms & Conditions