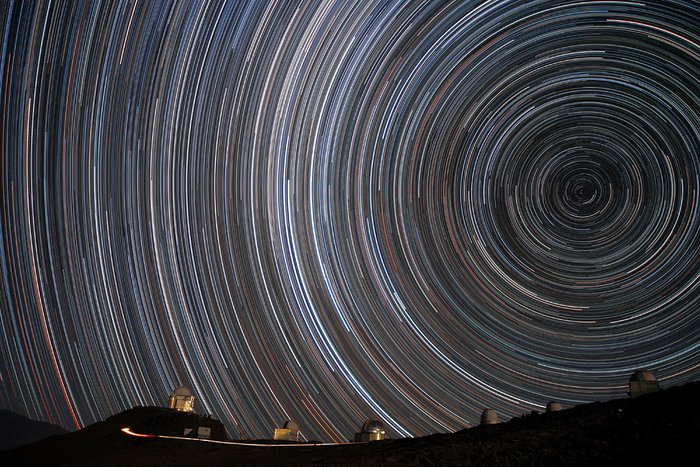 This image, taken by ESO Photo Ambassador Alexandre Santerne, is more than a little disorientating at first glance! Resembling an optical illusion or an abstract painting, the starry circles arc around the south celestial pole, seen overhead at ESO's La Silla Observatory in Chile.

Each circular streak represents an individual star, imaged over a long period of time to capture the motion of the stars across the sky caused by the Earth’s rotation. La Silla is based in the outskirts of Chile’s Atacama Desert at some 2400 metres above sea level, and offers perfect observing conditions for long-exposure shots like this; the site experiences over 300 clear nights a year!

The site is host to many of ESO’s telescopes and to national projects run by the ESO Member States. Some of these telescopes can be seen towards the bottom of the image. The ESO 3.6-metre telescope stands tall on the left peak, now home to the world's foremost extrasolar planet hunter: the High Accuracy Radial velocity Planet Searcher (HARPS).

Taking all these facilities together, La Silla is one of the most scientifically productive ground-based facilities in the world after ESO’s Very Large Telescope (VLT) observatory. With almost 300 refereed publications attributable to the work of the observatory per year, La Silla remains at the forefront of astronomy (ann15014).