The Stars of the Milky Way 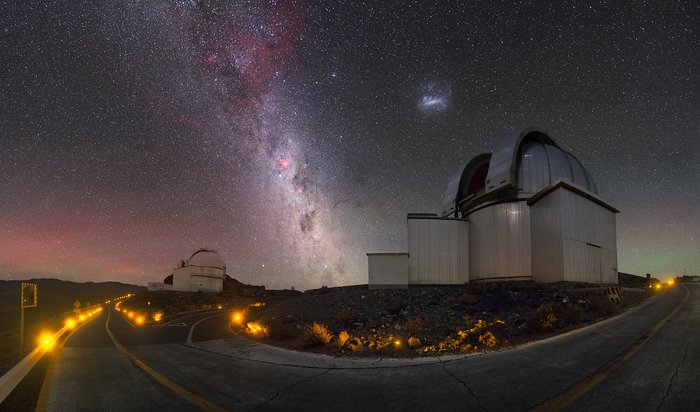 Seen here, the majestic Milky Way rises above ESO’s La Silla Observatory in Chile, its bright band punctuated by red regions of star formation and dark, weaving filaments of interstellar dust. Two of the site’s telescopes, the 1-metre Schmidt telescope (left) and the MPG-ESO 2.2-metre telescope (right), are are visible as well.

While all of the stars in the sky belong to the Milky Way galaxy, we commonly refer to this thick streak across the sky as “the Milky Way”. This is because of our position within our home galaxy: the Solar System sits on one of our galaxy’s spiral arms and is located roughly two-thirds of the distance between the Milky Way’s centre and its peripheries. The galaxy itself is shaped a little like a giant pancake with a bright bulge in the centre, with almost all of its constituent stars, gas, dust, planets, and so on lying within a thin disc. The “Milky Way” — the bright strip we see painted across the night sky in this image — is actually our view of this disc, which is why it appears to be so much brighter and more impressive than the surrounding sky, as we look inwards towards the densely-packed galactic centre.

To the centre-right of the frame, just above the MPG-ESO 2.2-metre telescope, is one of our nearest neighbours in space, a dwarf galaxy known as the Large Magellanic Cloud. The pink and green glow visible just above the horizon is known as airglow, and is caused by excited atoms in the Earth’s upper atmosphere.