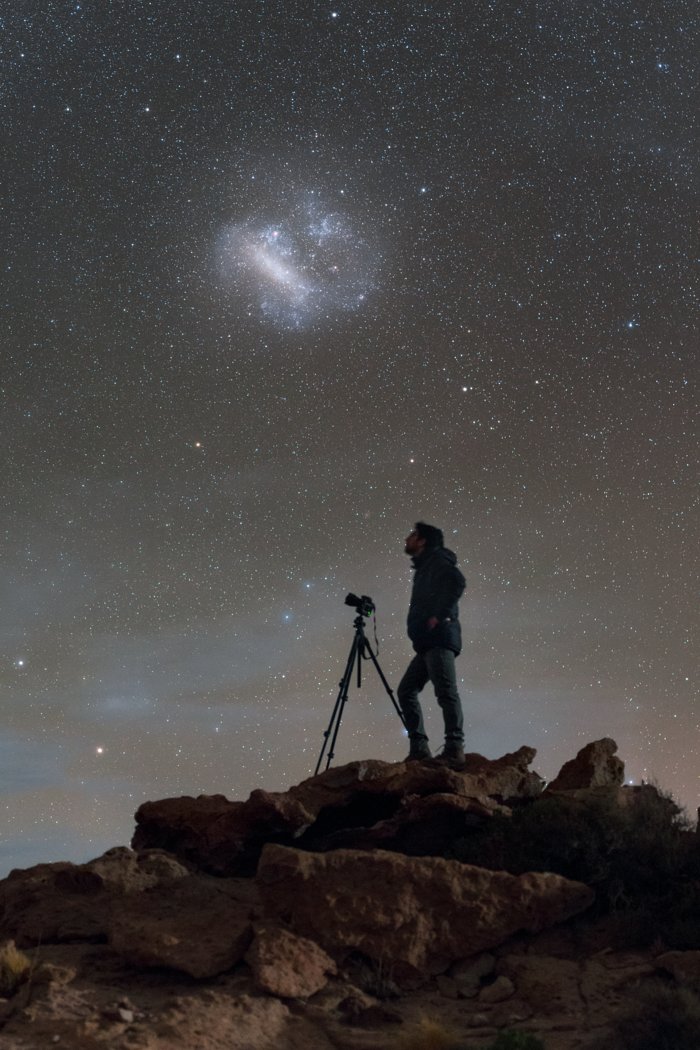 Posing here under the splendours of the southern sky is Babak A. Tafreshi, one of ESO’s Photo Ambassadors. Babak is standing on part of the massive Miñiques volcanic complex, located in the Antofagasta region of Chile’s Atacama Desert. This region is also home to ESO’s Paranal Observatory, where the Very Large Telescope (VLT) gazes up at the sky, observing exotic phenomena such as gamma-ray bursts, extrasolar planets, and supermassive black holes.

Each of the VLT’s constituent telescopes can detect objects roughly four billion times fainter than the naked eye can see, giving it a far richer view of the Universe than is available to humans. However, the skies above the Atacama are some of the clearest and darkest in the world — so it’s little wonder that Babak stands in awe beneath it all.

The spectacular swirl of blue above Babak’s head is the Large Magellanic Cloud (LMC), a dwarf galaxy that orbits the Milky Way. It is part of the Local Group and is the third closest galaxy to us, lying approximately 163 000 light-years away. The LMC used to be classified as an irregular galaxy, but astronomers now think it was originally a barred spiral galaxy before its shape was distorted by the gravitational influence of the Milky Way and the nearby Small Magellanic Cloud (SMC). A bridge of gas filled with protostars connects the SMC to the LMC, providing evidence of tidal interactions between the two galaxies.