Into the Epoch of Galaxy Formation

Working with the ESO Very Large Telescope (VLT) at the Paranal Observatory, a group of European astronomers [1] has just obtained one of the deepest looks into the distant Universe ever made by an optical telescope. These observations were carried out in the near-infrared spectral region and are part of an attempt to locate very distant galaxies that have so far escaped detection in the visual bands. The first results are very promising and some concentrations of galaxies at very large distances were uncovered.

Some early galaxies may be in hiding

Current theories hypothesize that more than 80% of all stars ever formed were assembled in galaxies during the latter half of the elapsed lifetime of the Universe, i.e. during the past 7-8 billion years.

However, doubts have arisen about these ideas. There are now observational indications that a significant number of those galaxies that formed during the first 20% of the age of the Universe, i.e. within about 3 billion years after the Big Bang, may not be visible to optical telescopes.

In some cases, we do not see them, because their light is obscured by dust.

Other distant galaxies may escape detection by optical telescopes because star formation in them has ceased and their light is mainly emitted in the red and infrared spectral bands. This is because, while very young galaxies mostly contain hot and blue stars, older galaxies have substantial numbers of cool and red stars. They are then dominated by an older, "evolved" stellar population that is cooler and redder. The large cosmic velocities of these galaxies further enhance this effect by causing their light to be "redshifted" towards longer wavelengths, i.e. into the near-infrared spectral region.

Observations in the infrared needed

Within the present programme, long exposures in near-infrared wavebands were made with the Infrared Spectrometer And Array Camera (ISAAC), mounted on ANTU, the first of the four 8.2-metre VLT Unit Telescopes.

A first analysis of the new observations indicates that "evolved" galaxies were already present when the Universe was only 4 billion years old. This information is of great importance to our understanding of how the matter in the early Universe condensed and the first galaxies and stars came into being.

While in the nearby Universe evolved galaxies are preferentially located in denser environments such as groups and clusters of galaxies, little is currently known about the distribution in space of such objects at early cosmic epochs.

In order to be able to see such obscured and/or "evolved" galaxies in the early Universe, and to look for hitherto unknown galaxies beyond the limits of "deep-field" imaging in visible spectral bands, it is necessary to employ other observing techniques. The astronomers must search for such objects on large-field, very long-exposure sky images obtained in the near-infrared (NIR, wavelength 1-2 µm) region of the electromagnetic spectrum and at even longer wavelengths (> 10 µm) in the far-IR and in the sub-mm range.

Such observations are beyond the capability of the infrared cameras installed on the world's 4-metre class telescopes. However, the advent of the ISAAC instrument at the 8.2-metre ANTU telescope has now opened new and exciting research opportunities in this direction for European astronomers.

With ISAAC, it is possible to obtain "deep" NIR images in an unprecedentedly wide field of view, covering a sky area about 7 times larger than with the best instruments previously available on very large telescopes. Such observations also benefit greatly from the very good optical quality provided by the active optics control of the VLT, as well as the excellent Paranal site.

This area of the sky is remarkably devoid of bright stars and provides a clear view towards the remote Universe, as there is little obscuring dust in our own Galaxy, the Milky Way, in this direction. It is therefore uniquely suited to probe the depth of the Universe. It is exactly for this reason that it was selected for a deep survey to be conducted with the Chandra X-Ray Observatory (CXO) during the guaranteed observing time of the former ESO Director General, Professor Riccardo Giacconi, and as a deep field of the ESO Imaging Survey (EIS, c.f. ESO Press Photos eso9954). The sky field observed with ISAAC and shown above is near the centre of the WFI image (ESO Press Photo eso9954a); it is displaced about 3.6 arcmin towards West and 1.0 armin towards North.

As seen on the photos, there are great numbers of faint galaxies in this direction. Those of very red colour emit most of their light in the infrared spectral region and are particularly interesting since they may either be highly obscured or contain mostly old stars, as described above.
New research possibilities

With observations as these, ISAAC is now opening a new window towards the distant Universe. The comparison of the new NIR observations with earlier exposures at other wavelengths provides unique research opportunities. It is possible to measure the average star formation rate and the total stellar mass content in galaxies that are heavily obscured and are therefore not observable in the optical bands and which may constitute a substantial fraction of the primeval galaxy population.

Such measurements will also allow to test current theories of galaxy formation that predict stars to be gradually assembled into galaxies, and hence envisage a progressive decline in the galaxy population towards very early cosmic times, in particular within 1-2 billion years after the Big Bang. Moreover, a comparison of NIR, optical and X-ray images will make it possible to gain new insights into the nuclear activity at the center of star-forming galaxies. It will become possible to study the distinct effects due to massive black holes and bursts of star formation.

Concentrations of galaxies at large distances

The relatively large field-of-view of ISAAC allows to gain information about the distribution in space of the faintest and most distant, evolved galaxies and also about the existence of associations of distant galaxies.

A first clear example is the concentration of galaxies that appear uniformly yellow in ESO Press Photo eso0006, apparently tracing a group of galaxies that was already assembled when the Universe was only 6 billion years old. A confirmation of the distance of a few of these galaxies has already been obtained by means of spectral observations in the framework of an ESO Large Programme, entitled "A Stringent Test on the Formation of Early Type and Massive Galaxies" and carried out by another group of astronomers [2].

A further clear example of a concentration of distant galaxies is seen in the upper right part of ESO Press Photo eso0006. The very red colours of several galaxies in this sky area indicate that they are even more distant, "evolved" galaxies, already present when the Universe was only 1/3 of the current age. 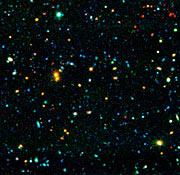