A Window towards the Distant Universe

The Osservatorio Astronomico Capodimonte Deep Field (OACDF) is a multi-colour imaging survey project that is opening a new window towards the distant universe. It is conducted with the ESO Wide Field Imager (WFI) , a 67-million pixel advanced camera attached to the MPG/ESO 2.2-metre telescope at the La Silla Observatory (Chile). As a pilot project at the Osservatorio Astronomico di Capodimonte (OAC) [1], the OACDF aims at providing a large photometric database for deep extragalactic studies, with important by-products for galactic and planetary research. Moreover, it also serves to gather experience in the proper and efficient handling of very large data sets, preparing for the arrival of the VLT Survey Telescope (VST) with the 1 x 1 degree 2 OmegaCam facility.

With the comparatively few large telescopes available in the world, it is not possible to study the Universe to its outmost limits in all directions. Instead, astronomers try to obtain the most detailed information possible in selected viewing directions, assuming that what they find there is representative for the Universe as a whole.

This is the philosophy behind the so-called "deep-field" projects that subject small areas of the sky to intensive observations with different telescopes and methods. The astronomers determine the properties of the objects seen, as well as their distances and are then able to obtain a map of the space within the corresponding cone-of-view (the "pencil beam"). Recent, successful examples of this technique are the "Hubble Deep Field" and the "Chandra Deep Field" (eso0106).

In this context, the Capodimonte Deep Field (OACDF) is a pilot research project, now underway at the Osservatorio Astronomico di Capodimonte (OAC) in Napoli (Italy). It is a multi-colour imaging survey performed with the Wide Field Imager (WFI), a 67-million pixel (8k x 8k) digital camera that is installed at the 2.2-m MPG/ESO Telescope at ESO's La Silla Observatory in Chile.

The scientific goal of the OACDF is to provide an important database for subsequent extragalactic, galactic and planetary studies. It will allow the astronomers at OAC - who are involved in the VLT Survey Telescope (VST) project - to gain insight into the processing (and use) of the large data flow from a camera similar to, but four times smaller than the OmegaCam wide-field camera that will be installed at the VST.

The field selection for the OACDF was based on the following criteria:

Based on these criteria, the astronomers selected a field measuring about 1 x 1 deg 2 in the southern constellation of Corvus (The Raven). This is now known as the Capodimonte Deep Field (OACDF). The above photo (ESO Press Photo eso0116a) covers one-quarter of the full field (Subfield No. 2 - OACDF2) - some of the objects seen in this area are shown below in more detail. More than 35,000 objects have been found in this area; the faintest are nearly 100 million fainter than what can be perceived with the unaided eye in the dark sky.

[2] This is a preliminary result by Juan Alcala', Massimo Capaccioli, Giuseppe Longo, Mikhail Sazhin, Roberto Silvotti and Vincenzo Testa , based on recent observations with the Telescopio Nazionale Galileo (TNG) which show that the spectra of the two objects are identical.

Technical Information about the OACDF Survey

The observations for the OACDF project were performed in three different ESO periods (18-22 April 1999, 7-12 March 2000 and 26-30 April 2000). Some 100 Gbyte of raw data were collected during each of the three observing runs. The first OACDF run was done just after the commissioning of the ESO-WFI.

The shallow survey was performed in the B, V, R and I broad-band filters. Four adjacent 30 x 30 arcmin 2 fields, together covering a 1 x 1 deg 2 field in the sky, were observed for the shallow survey. Two of these fields were chosen for the 0.5 x 1 deg 2 deep survey; OACDF2 shown above is one of these.

The deep survey was performed in the B, V, R broad-bands and in other intermediate-band filters.

The OACDF data are fully reduced and the catalogue extraction has started. A two-processor (500 Mhz each) DS20 machine with 100 Gbyte of hard disk, specifically acquired at the OAC for WFI data reduction, was used. The detailed guidelines of the data reduction, as well as the catalogue extraction, are reported in a research paper that will appear in the European research journal Astronomy & Astrophysics. 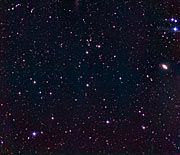 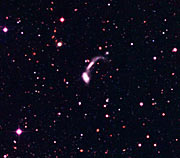 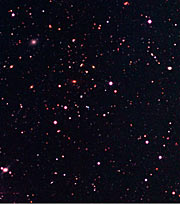 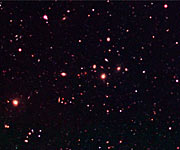 PR Image eso0116f
The Capodimonte Deep Field
Send us your comments!
Subscribe to receive news from ESO in your language
Accelerated by CDN77
Terms & Conditions