New Fast Lane towards Discoveries of Clusters of Galaxies Inaugurated

Using the ESA XMM-Newton satellite, a team of European and Chilean astronomers [2] has obtained the world's deepest "wide-field" X-ray image of the cosmos to date. This penetrating view, when complemented with observations by some of the largest and most efficient ground-based optical telescopes, including the ESO Very Large Telescope (VLT), has resulted in the discovery of several large clusters of galaxies. These early results from an ambitious research programme are extremely promising and pave the way for a very comprehensive and thorough census of clusters of galaxies at various epochs. Relying on the foremost astronomical technology and with an unequalled observational efficiency, this project is set to provide new insights into the structure and evolution of the distant Universe.

Our Galaxy, the Milky Way, for example, belongs to the so-called Local Group which also comprises "Messier 31", the Andromeda Galaxy. The Local Group contains about 30 galaxies and measures a few million light-years across. Other clusters are much larger. The Coma cluster contains thousands of galaxies and measures more than 20 million light-years. Another well known example is the Virgo cluster, covering no less than 10 degrees on the sky !

Clusters of galaxies are the most massive bound structures in the Universe. They have masses of the order of one thousand million million times the mass of our Sun. Their three-dimensional space distribution and number density change with cosmic time and provide information about the main cosmological parameters in a unique way.

About one fifth of the optically invisible mass of a cluster is in the form of a diffuse hot gas in between the galaxies. This gas has a temperature of the order of several tens of million degrees and a density of the order of one atom per liter. At such high temperatures, it produces powerful X-ray emission.

Observing this intergalactic gas and not just the individual galaxies is like seeing the buildings of a city in daytime, not just the lighted windows at night. This is why clusters of galaxies are best discovered using X-ray satellites.

Using previous X-ray satellites, astronomers have performed limited studies of the large-scale structure of the nearby Universe. However, they so far lacked the instruments to extend the search to large volumes of the distant Universe.

Marguerite Pierre (CEA Saclay, France), with a European/Chilean team of astronomers known as the XMM-LSS consortium [2], used the large field-of-view and the high sensitivity of ESA's X-ray observatory XMM-Newton to search for remote clusters of galaxies and map out their distribution in space. They could see back about 7,000 million years to a cosmological era when the Universe was about half its present size and age, when clusters of galaxies were more tightly packed.

Tracking down the clusters is a painstaking, multi-step process, requiring both space and ground-based telescopes. Indeed, from X-ray images with XMM, it was possible to select several tens of cluster candidate objects, identified as areas of enhanced X-radiation (cf ESO Press Photo eso0320).

But having candidates is not enough! They must be confirmed and further studied with ground-based telescopes. In tandem with XMM-Newton, Pierre uses the very-wide-field imager attached to the 4-m Canada-France-Hawaii Telescope, on Mauna Kea, Hawaii, to take an optical snapshot of the same region of space. A tailor-made computer programme then combs the XMM-Newton data looking for concentrations of X-rays that suggest large, extended structures. These are the clusters and represent only about 10% of the detected X-ray sources. The others are mostly distant active galaxies.

Back to the Ground

When the programme finds a cluster, it zooms in on that region and converts the XMM-Newton data into a contour map of X-ray intensity, which is then superimposed upon the CFHT optical image (ESO Press Photo eso0320). The astronomers use this to check if anything is visible within the area of extented X-ray emission.

If something is seen, the work then shifts to one of the world's prime optical/infrared telescopes, the European Southern Observatory's Very Large Telescope (VLT) at Paranal (Chile). By means of the FORS multi-mode instruments, the astronomers zoom-in on the individual galaxies in the field, taking spectral measurements that reveal their overall characteristics, in particular their redshift and hence, distance.

Cluster galaxies have similar distances and these measurement ultimately provide, by averaging, the cluster's distance as well as the velocity dispersion in the cluster. The FORS instruments are among the most efficient and versatile for this type of work, taking on the average spectra of 30 galaxies at a time.

The first spectroscopic observations dedicated to the identification and redshift measurement of the XMM-LSS galaxy clusters took place during three nights in the fall of 2002.

As of March 2003, there were only 5 known clusters in the literature at such a large redshift with enough spectroscopically measured redshifts to allow an estimate of the velocity dispersion. But the VLT allowed obtaining the dispersion in a distant cluster in 2 hours only, raising great expectations for future work.

Marguerite Pierre is extremely content : "Weather and working conditions at the VLT were optimal. In three nights only, 12 cluster fields were observed, yielding no less than 700 spectra of galaxies. The overall strategy proved very successful. The high observing efficiency of the VLT and FORS support our plan to perform follow-up studies of large numbers of distant clusters with relatively little observing time. This represents a most substantial increase in efficiency compared to former searches."

The present research programme has begun well, clearly demonstrating the feasibility of this new multi-telescope approach and its very high efficiency. And Marguerite Pierre and her colleagues are already seeing the first tantalising results: it seems to confirm that the number of clusters 7,000 million years ago is little different from that of today. This particular behaviour is predicted by models of the Universe that expand forever, driving the galaxy clusters further and further apart.

Equally important, this multi-wavelength, multi-telescope approach developed by the XMM-LSS consortium to locate clusters of galaxies also constitutes a decisive next step in the fertile synergy between space and ground-based observatories and is therefore a basic building block of the forthcoming Virtual Observatory.

[1] This a coordinated ESO/ESA release.

[2] The XMM-LSS consortium is led by the Service d'Astrophysique du CEA (France) and consists of institutes from the UK, Ireland, Denmark, The Netherlands, Belgium, France, Italy, Germany, Spain and Chile. The homepage of the XMM-LSS project can be found at http://vela.astro.ulg.ac.be/themes/spatial/xmm/LSS/index_e.html

[3] In astronomy, the "redshift" denotes the fraction by which the lines in the spectrum of an object are shifted towards longer wavelengths. Since the redshift of a cosmological object increases with distance, the observed redshift of a remote galaxy also provides an estimate of its distance.

This work is based on two papers to be published in the professional astronomy journal, Astronomy and Astrophysics (The XMM-LSS survey : I. Scientific motivations, design and first results by Marguerite Pierre et al., astro-ph/0305191 and The XMM-LSS survey : II. First high redshift galaxy clusters: relaxed and collapsing systems by Ivan Valtchanov et al., astro-ph/0305192).

Dr. M. Pierre will give an invited talk on this subject at the IAU Symposium 216 - Maps of the Cosmos - this Thursday July 17, 2003 during the IAU General Assembly 2003 in Sydney, Australia. 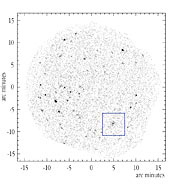 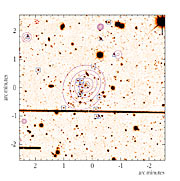 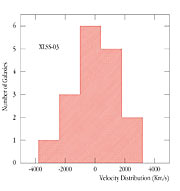 PR Image eso0320d
Velocity distribution of the XLSS-03 cluster
Send us your comments!
Subscribe to receive news from ESO in your language
Accelerated by CDN77
Terms & Conditions