Stellar Firework in a Whirlwind

Stars do not like to be alone. Indeed, most stars are members of a binary system, in which two stars circle around each other in an apparently never-ending cosmic ballet. But sometimes, things can go wrong. When the dancing stars are too close to each other, one of them can start devouring its partner. If the vampire star is a white dwarf – a burned-out star that was once like our Sun – this greed can lead to a cosmic catastrophe: the white dwarf explodes as a Type Ia supernova.

In July 2006, ESO’s Very Large Telescope took images of such a stellar firework in the galaxy NGC 1288. The supernova - designated SN 2006dr - was at its peak brightness, shining as bright as the entire galaxy itself, bearing witness to the amount of energy released.

NGC 1288 is a rather spectacular spiral galaxy, seen almost face-on and showing multiple spiral arms pirouetting around the centre. Bearing a strong resemblance to the beautiful spiral galaxy NGC 1232, it is located 200 million light-years away from our home Galaxy, the Milky Way. Two main arms emerge from the central regions and then progressively split into other arms when moving further away. A small bar of stars and gas runs across the centre of the galaxy.

The first images of NGC 1288, obtained during the commissioning period of the FORS instrument on ESO's VLT in 1998, were of such high quality that they have allowed astronomers [1] to carry out a quantitative analysis of the morphology of the galaxy. They found that NGC 1288 is most probably surrounded by a large dark matter halo. The appearance and number of spiral arms are indeed directly related to the amount of dark matter in the galaxy's halo.

The supernova was first spotted by amateur astronomer Berto Monard. On the night of 17 July 2006, Monard used his 30-cm telescope in the suburbs of Pretoria in South Africa and discovered the supernova as an apparent 'new star' close to the centre of NGC 1288, which was then designated SN 2006dr. The supernova reached magnitude 16, that is, it was about 10 000 times fainter than what the unaided eye can see.

Using spectra obtained with the Keck telescope on 26 July 2006, astronomers from the University of California found SN 2006dr to be a Type Ia supernova [2] that expelled material with speeds up to 10 000 km/s.

[2]: Type Ia supernovae are a sub-class of supernovae that were historically classified as not showing the signature of hydrogen in their spectra. They are currently interpreted as the disruption of small, compact stars, called white dwarfs, which acquire matter from a companion star. A white dwarf represents the penultimate stage of a solar-type star. The nuclear reactor in its core has run out of fuel a long time ago and is now inactive. However, at some point the mounting weight of the accumulating material will have increased the pressure inside the white dwarf so much that the nuclear ashes in there will ignite and start burning into even heavier elements. This process very quickly becomes uncontrolled and the entire star is blown to pieces in a dramatic event.

Type Ia supernovae play a very useful role as cosmological distance indicators, allowing astronomers to study the expansion history of our Universe, leading to the conclusion that the Universe is expanding at an accelerating rate (see e.g. eso9861). 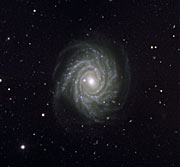 PR Image eso0739a
VLT image of supernova in beautiful spiral galaxy NGC 1288
Send us your comments!
Subscribe to receive news from ESO in your language
Accelerated by CDN77
Terms & Conditions