Using observations from ESO's VLT, astronomers were able for the first time to reconstruct the site of a flare on a solar-like star located 150 light years away. The study of this young star, nicknamed 'Speedy Mic' because of its fast rotation, will help scientists better understand the youth of our Sun.

Using a technique called 'Doppler imaging' [3], the astronomers reconstructed images of the surface of the star, detecting the presence of several spots. A few are near the visible pole, while most spots are asymmetrically distributed at mid-latitudes.

"The image we could secure of Speedy Mic is, given its distance, a real achievement, that allows us to localise for the first time ever the source of a flare and its surrounding," says Uwe Wolter, lead author of the paper relating the discovery.

The X-ray observations indeed identified several flares, which are sudden and vast releases of energy. For one of them, the astronomers could pinpoint its origin on the surface of the star. The flare, lasting about 4 hours, was a hundred times more energetic than a large solar flare and considerably larger than solar coronal loops.

The surprising finding, the team says, was the location of the flare. Contrary to our Sun, the site of the observed flare does not correspond to the detected spots [4].

"Interestingly, the flare occurs on a rather inconspicuous portion of the star's surface, away from the main concentration of activity in terms of dark spots," explains Wolter.

Speedy Mic is a very young star: with an age of only about 30 million years, it is roughly 150 times younger than the Sun. "It is very likely that our young Sun was a fast rotator as well," says Wolter. "Studying Speedy Mic is thus like observing our own host star while still in its infancy. These studies may also contribute to the understanding of current solar eruptions which can cause havoc in our telecommunications and power distributions."

The team reports their results in the journal Astronomy and Astrophysics ("Doppler imaging an X-ray flare on the ultrafast rotator BO Mic - A contemporaneous multiwavelength study using XMM-Newton and VLT", by. U. Wolter et al.).

[2] BO Microscopii (or BO Mic and nicknamed 'Speedy Mic') is a young star with a mass about 90 % the mass of our Sun. It is located 150 light years away towards the Microscope constellation. Speedy Mic owns its name because of its very fast rotation: it completes a full turn in about 9 hours. The object rotates thus 66 times as fast as our Sun, which results in much stronger magnetic fields than on the Sun.

[3] Speedy Mic is a star slightly smaller than the Sun and is about ten million times further away from us than the Sun. Trying to see spots on its surface is thus as challenging as trying to directly obtain a photograph of the footsteps of Neil Armstrong on the Moon, and be able to see details in it. This is impossible to achieve even with the best telescopes: to obtain an image with such amount of details, you would need a telescope with a 400 km wide mirror! Astronomers make therefore use of indirect imaging techniques, such as Doppler imaging, to achieve this incredible prowess. Doppler imaging makes use of the information contained in the slightly changing spectra observed as a star rotates. In this case, the astronomers obtained 142 spectra of the star with the UVES spectrograph on ESO's VLT.

[4] Sunspots, which are cooler, but still very hot regions of the Sun's surface, are known to be regions of intense magnetic activity. 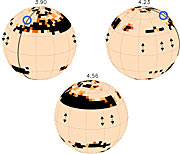 PR Image eso0753a
Mapping spots on Speedy Mic
Send us your comments!
Subscribe to receive news from ESO in your language
Accelerated by CDN77
Terms & Conditions